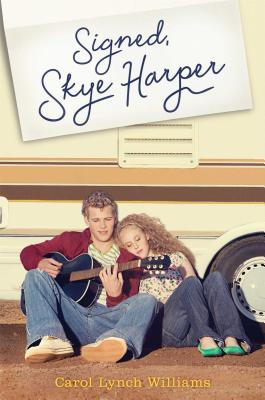 
Email or call for price
In trying to reunite with her mother, Winston discovers the many meanings of family and finds friendship in an unexpected place in this coming-of-age novel from the author of Waiting, which Kirkus Reviews, in a starred review, called “exceptional” and Glimpse, which Booklist called “gripping.”

Life is just fine for fourteen-year-old Winston. She loves her dog, Thelma, and although she never knew her dad, and her mom left ten years ago in search of Hollywood fame, Winston has family with Nanny, who is in her forties, and that doesn’t even make her old. But a “just fine” life gets a lot more exciting when a letter arrives from Skye Harper, aka Judith Fletcher, aka Winston’s mother. She needs help, and Nanny says the best way to give it is to take a cross-country road trip—in a “borrowed” motor home—to go find Mama once and for all. Winston’s not so sure about this plan, but with a cute stowaway named Steve along for company and an adventure on the horizon, this is sure to be a summer to remember.
Carol Lynch Williams is a PEN Award–winning author of more than a dozen books and a graduate of the Vermont College MFA program. Carol facilitates the children’s writing conferences at Utah Valley University and Brigham Young University. She lives in Utah with her family. Visit her at CarolLynchWilliams.com.
SIGNED, SKYE HARPER Author: Carol Lynch Williams Review Issue Date: April 15, 2014 Online Publish Date: March 31, 2014 Publisher:Paula Wiseman/Simon & Schuster Pages: 304 Price ( Hardcover ): $17.99 Price ( e-book ): $10.99 Publication Date: May 13, 2014 ISBN ( Hardcover ): 978-1-4814-0032-9 ISBN ( e-book ): 978-1-4814-0034-3 Category: FictionA teen takes a road trip with her longtime crush, her grandmother, their dog and their one-legged rooster in a stolen RV to retrieve her mother, whom she hasn’t seen in 11 years. It’s 1972, and 15-year-old Winston (she’s named after the cigarette) is a mean swimmer—she hopes to make it into the Olympics and has a Mark Spitz poster in her bedroom that she regularly drools over. She’s lived with her Nanny since she was 4, ever since her mother, Skye Harper, packed up and went to Vegas. Winston has gotten postcards from her, fewer as the years rolled by, and one day, she receives one asking if she and Nanny can come get Skye. They don’t have a chance of making it in their intermittently reliable jalopy, so Nanny “borrows” a luxury motor home from their neighbor. What makes her theft particularly interesting is that the neighbor’s son is none other than Steve, the boy of Winston’s dreams. Hours into the trip, Winston draws back a curtain in the cabin only to discover a stowaway—Steve himself. Williams creates beautifully distinctive characters and gives them a terrifically original plot with moments of humor and quiet poignancy. The conclusion is as lovely as it is true to life, with an adroit balance between the happily-ever-after of fairy tales and the numbing pain of futile hope. A fine story of a mother-and-child reunion, packed with quirky characters and lessons about love. (Historical fiction. 12-16)
— Kirkus Reviews on April 15

Winston has lived in Florida with her grandmother, Nanny, ever since her mother "took off headed west, for California, and for fame." Now 15, Winston hasn't seen her mother in more than a decade; after she gets a letter from Momma asking for help ("What do you 2 say about comming to git me?"), Nanny "borrows" her business partner's motor home for the trip to Las Vegas, only to find out that his son, Steve, is asleep inside. Williams's (Waiting) warm, humorous, and poignant story unfolds against the backdrop of the 1972 Munich Olympics and Mark Spitz's seven gold medals; Winston herself is a funny, strong and sensitive heroine with dreams of becoming an Olympic swimmer. As the story progresses, the short chapters (sometimes as short as a single line of text) become a powerful plot device that strengthens Winston's voice, provides moments of laugh-out-loud humor, and builds intense emotion across all the characters, especially as romance grows between Steve and Winston. Ages 12–up. Agent: Stephen Fraser, Jennifer DeChiara Literary Agency. (May)
— Publishers Weekly, 6/2/14

When Winston was four, her mother left to find fame in Hollywood, leaving Winston in the care of her grandmother. Nanny is the only family Winston has known, and she is okay with that, but when they receive a postcard from the estranged Judith Fletcher, now known as Skye Harper, asking them to come get her from Las Vegas, Nanny jumps at the chance to have her daughter back. Nanny decides to steal her neighbor’s RV and—along with Winston, their dog, and a rooster—sets off on a cross-country road trip to bring Skye Harper home. While on the road, they discover that Winston’s neighbor crush has stowed away in the RV. Through short chapters, Winston’s confusion over growing up, falling in love, and discovering her family is seamlessly woven into an emotional coming-of-age story. With a balance of family drama and humor, Winston’s journey never feels forced, and the end, while almost too happy, flows nicely with the plot. A lovely addition to a collection of family stories.
— May 2014