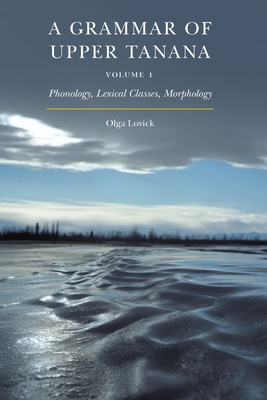 By Olga Lovick
Email or call for price.
Usually Ships in 2-3 Days

A Grammar of Upper Tanana, Volume 1 provides a linguistically accurate written record of the endangered Upper Tanana language. Serving as a descriptive grammar of Upper Tanana, the book meticulously details a language that is currently fluently spoken by approximately fifty people in limited parts of Alaska’s eastern interior and Canada’s Yukon Territory. As part of the Dene (Athabascan) language group, Upper Tanana embodies elements of both the Alaskan and Canadian subgroups of Northern Dene. This is the first comprehensive grammatical description of any of the Alaskan Dene languages.

With the goal of preserving a language no longer consistently taught to younger generations, Olga Lovick’s foundational study is framed within the traditional form of linguistic theory that allows linguists and nonspecialists alike to study a vulnerable language that exists outside the dominant Indo-European mainstream. This text provides a substantive bulwark to protect a language acutely threatened by near-term extinction. In its expansive detailing of the Upper Tanana language, this volume is methodologically oriented toward structural linguistics through approaches focusing on phonology, lexical classes, and morphology. With attention to both detail and thoroughness, Lovick’s comparative approach provides solid grounding for the future survival of the Upper Tanana language.

​Olga Lovick is a professor of linguistics and department head at the University of Saskatchewan. She is the editor of a collection of stories of the Tetlin people of Alaska.

“A Grammar of Upper Tanana, Volume 1 moves an already high bar for work on Dene languages even higher with its in-depth coverage of the standard topics enhanced by sections on the semantics of various morphemes, interjections, and nonverbal predicates. It is an outstanding contribution to the understanding of this language.”—Keren Rice, former president of both the Canadian Linguistic Association and the Linguistic Society of America