Save Christmas for Christ Alone (Paperback) 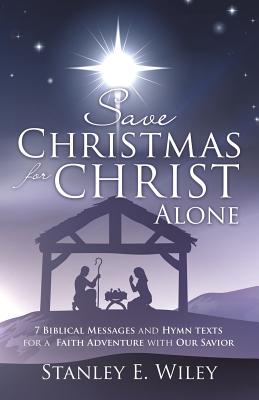 Meet The Author STANLEY E. WILEY -- M.A., M.Div. My life has been an "Adventure" of travel and seeking to help people grow intellectually and spiritually wherever I've gone. My first career was Pastoral and Youth ministry (13 years) starting during my seminary studies. From being ordained as a Methodist Elder in 1961 I served three churches in the NY Conference and for three years as Campus Ministry Coordinator in two NJ Conferences(visiting 13 colleges and campus ministers). I changed my career goal in 1972 to Career Development Counselor at three community colleges (2 NJ,1 FL). I taught "Career Choice" and "Human Potential", as well as Speech & Communication courses. While I was Director of a Business School in Atlantic City God called me to ministry as Chaplain at Rescue Missions in NJ, FL and NC. I became a Florida Vocational Rehabilitation Specialist for 1 year. While in NC I was certified in Clinical Pastoral Care. Back in NJ I was employed two years as a Hospice Chaplain. In 1997 I returned to the community college as a counselor for students with disabilities before retiring in 2001. Then I again was called to Pastor two churches in NJ (2001-2007). Janice and I married in Margate NJ and our daughter was born a year later in FL. She was welcomed by our parents and her step sister and brother. Jan was a guidance counselor and teacher until retirement in 2005. She has been my primary support in all my job changes; and above all my caregiver after I was diagnosed with Lymphoma in 1995, and during four periodic rounds of chemo. We met singing in a musical and continued several acting and singing roles in NJ, FL, and NC. We also sang in several church choirs, sometimes as soloists. And we both play musical instruments, and enjoy directing and acting in Christain Dramas. Favorite hymns include "Blessed Assurance" and "Trust And Obey." Together we enjoy being fulfilled as we support and pray for God's blessing of our three children and five grandchildren. They are one of God's greatest and most delightful gifts.