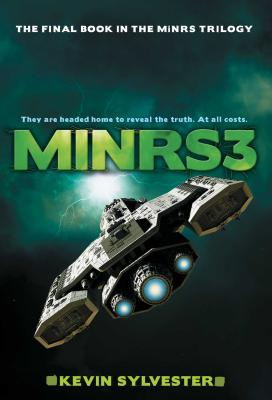 This is book number 3 in the MiNRS series.

The action-packed conclusion to the MiNRS space adventure series, which School Library Journal praised for keeping readers “on the edge of their seats.”

We do what we do best. Run. Hide. Survive.

The children of Perses must return to Earth. They defeated Major Kirk Thatcher on their adopted planet, but his evil plans are still unfolding. People need to know the truth.

Christopher has a video of Thatcher killing an injured grinder in cold blood. If they can show that to the people of Earth, they might just turn the tide. The MiNRs need to bear witness.

A transport ship might get them back home, or it might send them spinning off into the deepest recesses of space. Is it worth the risk?

Cracks begin to appear in the group. Darcy refuses to leave Perses, the only home she’s ever known. And Pavel’s mistrust of the grinders threatens to destroy them all.

Once again, Christopher has to make tough choices, choices that will cost them dearly. And even when things seem to be going well, there are hidden dangers. A strange noise on their transport ship signals the return of their worst nightmare. And the Earth they left years before is not the Earth they will return to now.

Can Christopher and his friends win the race to reveal the truth? Or will they escape one dangerous planet for one far worse?

Kevin Sylvester is an award-winning writer, illustrator, and broadcaster. His books include the MiNRS trilogy and the Neil Flambé series. He lives in Toronto, Ontario. Visit him at KevinSylvesterBooks.com or on Twitter @KevinArts.

"Sylvester managed to create a set of believable and empowered characters, equipping them with mechanical tools and transports that allowed them to dig beneath the surface of the planet, evading Thatcher and his goons."
— Vancouver Sun

"Brainy and somewhat naïve, Christopher makes for a solid, earnest narrator, and the other kids, especially his enthusiastic friend Elena, are similarly believable."
— Publishers Weekly

"Plot twists and turns pull readers through the novel and keep them on the edge of their seats. There is never a dull moment or unnecessary scene. VERDICT: A solid survival story with a cliff-hanger ending that will leave readers clamoring for more."
— School Library Journal

“A space adventure like no other, this book takes the reader to a new world. Sci-fi readers will love the non-stop action, futuristic setting, space travel, technology, and the possibility of life on another planet.”
— School Library Connection

Nominated for the Georgia Tome Society It List, for Grades 6-8 and Grades 9-12 lists.

Named an honor book for the Canadian Library Association's 2016 Book of the Year for Children Award.