My Life and Rugby: The Autobiography (Paperback) 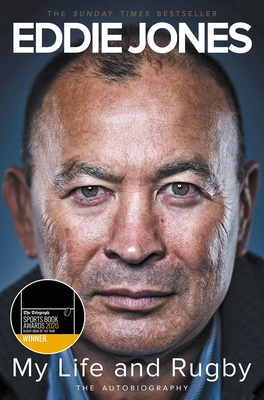 The Sunday Times bestselling rugby book of the year'A genuine super-coach', Stephen Jones, Sunday TimesBrilliant, honest, combative – Eddie Jones is a gigantic yet enigmatic figure in world rugby and a true legend of the game. In My Life and Rugby he tells his story for the first time, including the full inside story of England’s 2019 World Cup campaign.Eddie Jones is one of the most experienced and decorated coaches in world rugby. His career has spanned four World Cups: from the 2003 final, working with South Africa when they won in 2007, and causing the greatest upset in the history of the game in 2015 when he masterminded the Japanese victory over South Africa. Most recently, he led England on their incredible run at the 2019 World Cup, culminating in a stunning victory against the All Blacks before falling to South Africa in the final.Since taking over as head coach of England in 2015, Eddie Jones has orchestrated a complete revival of the national team. He has won the Six Nations Championship back-to-back, including England’s first Grand Slam in a generation and their first-ever whitewash of Australia in their own backyard, as well as taking them on their longest-ever winning streak, matching the world record held by the All Blacks.Learning from the extreme highs and lows of his own playing career– including the numerous successes playing for Randwick and New South Wales but also the painful disappointment of never playing for Australia – he shows what it takes to be the best in the world and how everything he has learned about the game, both on and off the pitch, has gone into plotting England’s route to the top of world rugby.Written with Donald McRae, twice winner of the William Hill Sports Book of the Year award and three-time Sports Feature Writer of the Year, My Life and Rugby is the story of one of the most compelling and singular figures in rugby. Told with unflinching honesty, this is the ultimate rugby book for all fans of the sport.

EDDIE JONES is the head coach of the England Rugby Union team and led them to the 2019 World Cup final. He took Australia to the 2003 World Cup final as well, and masterminded Japan’s famous victory over South Africa in 2015 – one of the biggest upsets in sport. He was also the assistant coach for South Africa when they won the 2007 World Cup.DONALD McRAE is an award-winning author of twelve books. He has won the William Hill Sports Book of the Year award twice. He is a three-time Sports Interviewer of the Year winner and has also been Sports Feature Writer of the Year on three occasions, most recently in 2018 and 2019, for his work in the Guardian.