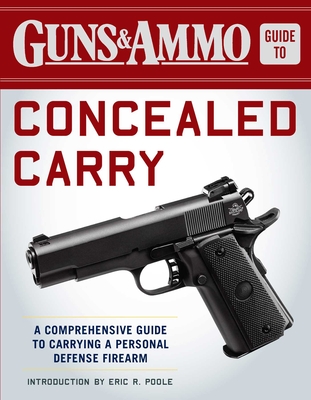 Everything you need to know about concealed carry from top firearms writers.

The Guns & Ammo Guide to Concealed Carry is packed with a wealth of valuable information compiled by the foremost firearms writers today. A vast range of topics is covered in these articles, including:

Defense of others
Gun control
The armed traveler
Fortifying your castle
Responding to an active shooter
Car fights
And much more!

Discover tried and true tips, tactics, and techniques from the pros along with guidance on buying gear and firearms from experts including Massad Ayoob, Jason Teague, Tom Beckstrand, and Richard Nance. The Guns & Ammo Guide to Concealed Carry has everything you could want to learn about personal defense firearms.

Guns & Ammo was established in 1958. It presents content covering the complete spectrum of firearms, accessories, and related products, is the most respected media brand in the firearms field, and reaches more than a million visitors a month online and 10.8 million readers in print. Its offices are in Peoria, Illinois.

Eric R. Poole is the editor of Guns & Ammo magazine and brings years of service from the US Marine Corps to the world’s most widely read firearms magazine. His experience as an armorer and his background with print publications at the NRA led him into his dream career of working at G&A. An avid hunter, Eric has enjoyed the pursuit of wild game from North America to Africa. Since taking the ropes at G&A, Eric has transformed the look and feel of the magazine while developing a personal connection to his readers.

"Having access to a concealed handgun and being aware of your environment could be a life-saving combination." —Richard Nance

"Having access to a concealed handgun and being aware of your environment could be a life-saving combination." —Richard Nance