A World Champion's Guide to Running the Beer Mile: A Manual and Memoir of Running, Chugging, and (Not) Throwing Up (Paperback) 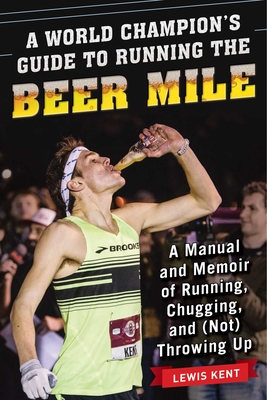 Part memoir, part how-to manual, A World Champion's Guide to Running the Beer Miles is for both serious athletes and recreational runners who love to run, enjoy a drink, and like the idea of a challenge.

In June, 2015, Lewis Kent was just an ordinary twenty-one-year-old college kid who liked to run. By December, 2015, just six months later, he had appeared in ESPN, Buzzfeed, Ellen, and dozens of other major outlets. Videos of him running went viral, and he received daily calls from agents. So why all the attention? Simple: He ran the Beer Mile, and he ran it unbelievably fast.

The beer mile is a track or road race in which you chug a beer, run a quarter mile, chug another beer, run another quarter mile, chug, run, chug, run: four beers, four laps, no vomiting allowed. “Chug, run, repeat.” If it sounds difficult (but really fun), it’s because it absolutely is. The event first went viral in 2014 when the five-minute barrier was broken. Kent became the world champion and broke the world record in late 2015 with a time of 4 minutes, 47 seconds, just over a minute longer than the world record for the regular mile. After that, he became the world’s first professional Beer Miler, literally being paid for his superhuman ability to run fast and drink quickly.

Lewis Kent grew up in Mississauga, Ontario where he found his passion for running. In 2012, Kent began school at the University of Western Ontario, where he competed in both cross country and track and field. With the legal drinking age in Canada being 19, Kent and his fellow beer milers had a two-year head start on the American competition. Kent ran his first beer mile in April of 2014, finishing fourth in a local race in a time of 6:11. He set his first of three beer mile world records on August 7th, 2015 in a time of 4:55.78.He won the Beer Mile World Classic two weeks later on August 22nd, 2015, and shortly after signed the first ever professional beer mile contract with Brooks Running. The deal sparked major media buzz, with ESPN, TMZ, BroBible, and other major media sites publishing the story. It led to Kent making an appearance on the Ellen DeGeneres show on November 30th. The next day, he ran at the FloTrack Beer Mile World Championships, winning in a world record time of 4:47.17. Kent currently lives and trains in Ontario, Canada.

"Lewis Kent, and the current crop of competitive beer milers, has taken a traditional distance runner’s rite of passage and transformed it into a professional sport—and it’s entertaining as hell. Kent’s story is as fascinating and fun as watching your first beer mile. It’s also loaded with plenty of tips and tricks for the aspiring beer miler, which is great because you’ll know doubt want to lace 'em up and drink some down after reading. I’d recommend grabbing a cold one and enjoying this read in one binge session." —Desiree Linden, two-time Olympic marathoner and winner of the 2018 Boston Marathon

"When you hear about the Beer Mile and see how these guys do it, in the time they do it in, it's undeniably fascinating. Most of us can't drink four beers in five minutes on the couch. These guys run a mile. Hear the account from one of the guys who became the best in the world at a niche sport that has fascinated North America." —Darren Rovell, Senior Executive Producer, The Action Network

"Running a beer mile is a uniquely painful (yet fun!) experience. It requires exceptional running AND chugging skills along with an iron stomach and care free attitude. Few have done it better than Lewis Kent, and the advice he puts forth in these pages is rock solid.” —Nick Symmonds, six-time US 800m champion and CEO of Run Gun