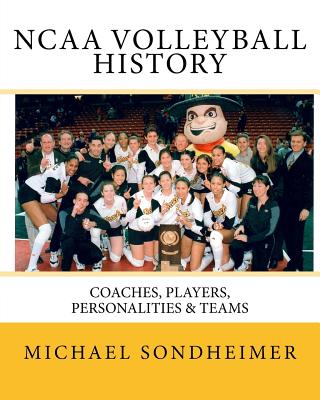 The 352 page 'coffee table' style 8 by 10 inch book, which includes over 40 photos, details the history of every NCAA Division I men's and women's volleyball championship going back to the start in 1970 along with feature stories on the college sport's leading coaches, players, personalities & teams. It also chronicles the birth of NCAA women's beach volleyball and includes features on DII and III volleyball. More than 100 interviews were conducted in the writing of NCAA Volleyball History, and that same elite group of personalities helped vote to assemble lists of the all-time greatest college teams, players, and coaches that are included in the book. There is a special media section of facts and figures for use in broadcasting the sport and a breakdown of the side-out championships (1970-2000) vs. the current rally scoring ones (2001-2016), plus the volleyball rules that changed the sport over the years. There is something for anyone interested in NCAA college volleyball history and their favorite teams that have won titles.

Michael Sondheimer has provided service to the NCAA volleyball community for over 40 years as well as working 4 Olympic Games. He has participated at NCAA Championships since 1974 covering the event court-side or providing TV statistics & research, plus working on the beach. Michael has done almost every NCAA Women's Volleyball Division I Championship from 1981 to 2012, primarily for Television. He was the first statistician that was traveled by television for college volleyball as part of the official TV crew. He traveled for women's pro beach volleyball TV in the 1990s before the merger with the AVP and then traveled for many years in the 2000s for NBC for its summer AVP beach package. Sondheimer brought his college volleyball television and research work to the beach volleyball game and then to the Olympic Games for NBC Sports. He worked both indoor and beach for NBC at the 1996 Atlanta Olympic Games. In 2000 he worked indoors at the Sydney Olympic Games as well as writing feature stories for the NBC Quokka website. In 2012 he did indoor volleyball for NBC at the London Olympics. Prior to those Olympic Games he ran the basketball statistics at the 1984 Los Angeles Olympic Games. His international volleyball work began as the assistant publicity director for the 1975 NORCECA Games at the Los Angeles Sports Arena. He helped develop the original NCAA Volleyball Statistical Box Score that has been used throughout the USA at various events in all levels of the sport. The United States Volleyball Association (USVBA) honored Sondheimer with the first Vigo Nelson award for producing the nation's top college volleyball media guide. He then received the USVBA Douglas Boyden media award for his college volleyball publicity work. The AVCA honored Sondheimer with the Grant Burger media award for his continued work and support of college volleyball. For almost 40 years, Sondheimer wrote occasional articles and provided college information for Volleyball Magazine, Volleyball Monthly and Volleyball. He also was a several year member of the Volleyball Magazine Executive Board. He worked 40 years in collegiate athletics before retiring and was honored numerous times for his sport accomplishments. He was inducted in 1993 into the Southern California Jewish Sports Hall of Fame for Sports Media. His first book, 'Recruiting 101', a blueprint for coaches, parents and students on the college athletic recruiting process, is currently available at Amazon Books.