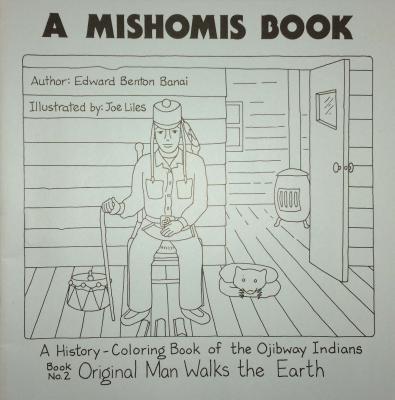 Who are the Ojibway people, and how did they come to live in the lands of the Great Lake? Let Mishomis, or “Grandfather” in the Ojibway language, draw you a picture. In these delightful coloring books, the history of the Ojibway unfolds, beginning with the story of creation.

As Original Man (some will call him Anishinabe) walks the Earth, giving names to all things, Mishomis carries young readers along with Ojibway lore and wonder and with pictures asking to be brought to colorful life. The story follows the first five books of The Mishomis Book, telling of the Original Man’s grandmother, Nokomis; of the Earth’s first people; and of the Great Flood that changed everything. Thank Gitchie Manito for Turtle, on whose back the new world rests! Coloring along with Mishomis’s words, readers will be enchanted to learn the legends and discover the spirit of the Ojibway traditions and way of life.

Edward Benton-Banai is a Wisconsin Ojibway of the Fish Clan and a spiritual teacher of the Lac Court Orielles Band of the Ojibway Tribe. One of the original founders of the American Indian Movement, he was also the founder and executive director of the Red School House in St. Paul, Minnesota.