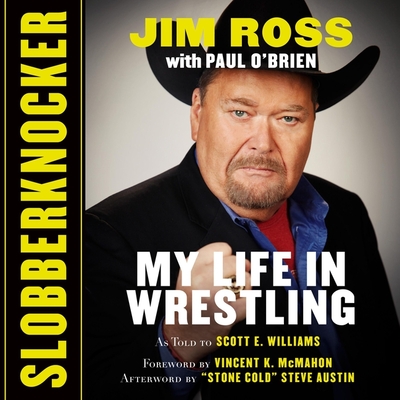 The Wrestling Biography You've Been Waiting For There are few people who have been in the wrestling business longer than Jim Ross. And those who have made it as long as he has (half a century to be exact) probably made enemies or burned bridges. But that's just not JR. Slobberknocker is the story of how an Oklahoman farm kid, with a vivid imagination and seemingly unattainable dreams, became "The Voice of Wrestling" to record TV audiences and millions of fans around the world. Jim opens up about his life as an only child on a working farm, who became obsessed with professional wrestling having first saw it on his grandparent's TV. Even though the wrestling business was notoriously secretive and wary of "outsiders," he somehow got a foot in the door to start a historic career, one where he held almost every job in the business-from putting up the ring to calling matches, from driving his blind, drunk boss towards revenge, to consoling two naked 600 pound brothers in the shower room after a rough match. With all those adventures and responsibilities, he's also recognized as the man who built and nurtured a once-in-a-generation talent roster that took the WWE to new heights, including "Stone Cold" Steve Austin, Brock Lesnar, and The Rock to name a few. Readers will finally get the opportunity to hear never-before-told stories about the politics, wackiness, and personalities of all the biggest stars. But this isn't just a wrestling story. It's a story about overcoming adversity and achieving your dreams, as success did not come without significant costs and unforeseen challenges to JR, including multiple bouts of severe facial paralysis called Bell's Palsy. Currently the host of the podcast The Ross Report, any fan of wrestling-from the territory days to today-will be enthralled with stories from the road and behind the scenes. Slobberknocker is the first time Ross tells his story-and you don't want to miss it.