Chiefs Kingdom: The Official Story of the 2019 Championship Season (Hardcover) 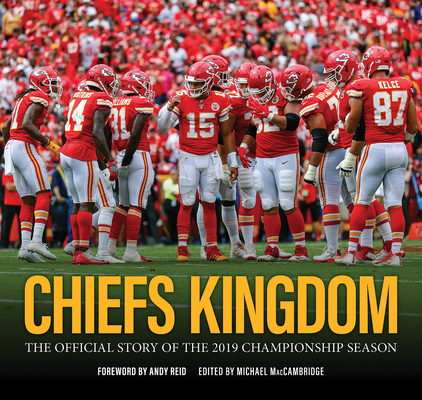 The only authorized, intimate portrait of the spectacular season that saw the Kansas City Chiefs return to—and win—their first Super Bowl in fifty years. Featuring a foreword from head coach Andy Reid, and exclusive behind-the-scenes images from the Chiefs’ team photographers, this is a vivid, one-of-a-kind chronicle of the Chiefs’ march to their second world championship.

In 2019, the NFL’s one hundredth season, the Chiefs once again scaled pro football’s summit, persevering through a season marked by adversity and resilience. Experience the historic journey as it has never been seen before: from the inside, through rare, on- and off-the-field photography, key never-before-seen artifacts spanning the entire campaign, and Andy Reid’s personal account of winning his first Super Bowl ring as a head coach.

Chiefs Kingdom is more than a commemorative celebration of a world title; it is the epic story of a team on a mission, as a revamped defense and its new coordinator came together over the course of a long season, and the league’s most potent offense survived the temporary loss of its MVP quarterback, Patrick Mahomes.

From “The West Is Not Enough” to “2-3 Jet Chip Wasp,” this lavish, handsome book documents the remarkable turn of events during the marathon regular season, as well as the unprecedented post-season run in which the Chiefs rallied from double-digit deficits in all three games. Colorful, insightful, and dramatic, Chiefs Kingdom is an absorbing account of one of the most unforgettable seasons in pro football history.

Michael MacCambridge has written about movies, music, and popular culture, but he is best known as one of the nation’s foremost authorities on pro and college football. His book America’s Game: The Epic Story of How Pro Football Captured A Nation was named one of the most distinguished works of nonfiction by the Washington Post in 2004. MacCambridge’s freelance work has appeared in the New York Times, the Wall Street Journal, the Washington Post, Sports Illustrated, GQ, and many other publications. Since 1997, he has been an adjunct professor at Washington University in St. Louis, Missouri.