The Black Prince and King Jean II of France: Generalship in the Hundred Years War (Hardcover) 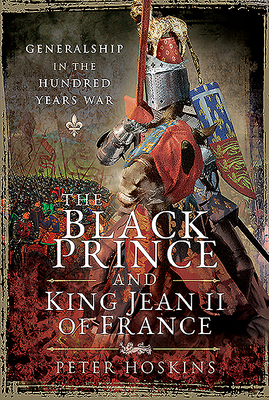 Detailed comparison of the conduct of military affairs by the Black Prince and the French King Jean II.

What were the essential qualities for a military commander during the Hundred Years War? How important were strategic vision, tactical skill and powers of leadership in medieval warfare? These are the questions that Peter Hoskins explores in this perceptive study of the careers of Edward, the Black Prince who led the English army to victory at the Battle of Poitiers and the opponent he defeated, the French King Jean II. Their contrasting characters and backgrounds are considered as is the military tradition of their time, but the primary focus of the book is a close comparison of their strengths and weaknesses as soldiers as they were revealed on campaign and on the battlefield.

The Black Prince was one of the most admired generals of his generation, a charismatic leader, a shrewd tactician and strategist and a decisive commander. In contrast King Jean was impulsive, driven more by pride, his sense of honor and personal objectives than strategic priorities. When he was put to the ultimate test at Poitiers he lost control of his army, while the Black Prince took the initiative personally to secure victory against the odds.

Peter Hoskins analyses the leadership qualities of the prince and the king according to the principles of war enunciated by Sun Tzu and Vegetius as well as the modern principles of war of the United Kingdom armed forces. He gives readers a fascinating insight into the nature of command and the conduct of war in the Middle Ages.