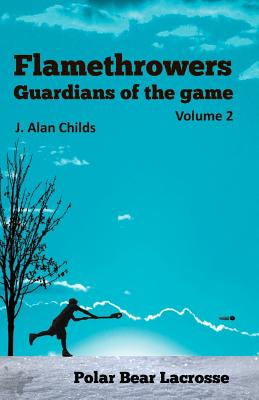 J. Alan Childs grew up in southern California playing sports and moved his family in Minnesota in 1992. Of all places in the world, the state of hockey beaconed his kids to start playing lacrosse. Together the family of five lacrosse kids started the local lacrosse community program in Burnsville, which led to traveling to other lacrosse communities across the United States and Canada. The family number is 7, which is the jersey number all the kids wore when playing hockey and lacrosse. The Flamethrower series started as a comic book Brody Childs wrote in 2007 as a summer project. (Brody is the youngest of the five kids, others are Courtney, Cory, Jace, and Bailey) Dad(Alan) took the comic story and wrote the first Flamethrower book in 2010. Then as book two was started the research in Canada led to a newspaper headline, "Winnipeg welcomes the Champions of the United States, St. Paul Lacrosse Club." This headline led to the discovery of an amazing story of early lacrosse in the state of Minnesota so the next book Minnesota Lacrosse: A History was written to tell that fun non-fiction story. Books and Trivia Games available by the author: Flamethrowers: Guardians of the game - Volume 1- A lacrosse story (Released 2010) Flamethrowers: Guardians of the game - Volume 2- Polar Bear Lacrosse (Release Dec 1 2016) Minnesota Lacrosse: A History (Released 2015) Lacrosse History Trivia Card Game - 50 tough lacrosse questions (Released November 2016) Flamethrower Stories - Which team do I play for? (Released Jan 1 2017) Children's full color picture book for teaching young kids about lacrosse Alan has been married for over 30 years, and has five children, with five young granddaughters, soon to be lacrosse players! You can follow Alan's Lacrosse Blog at www.laxhistorygeek.com and on Facebook at Flamethrowerlax