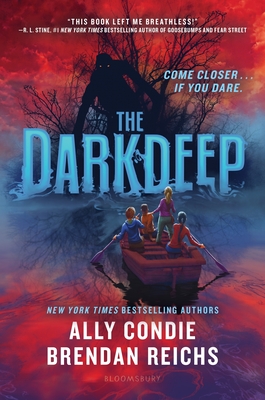 "Move over, Stranger Things. . . The Darkdeep will pull you into an irresistibly eerie world beyond your wildest dreams--and nightmares." --Melissa de la Cruz, #1 New York Times bestselling author of the Descendants series

Everyone in Timbers knows Still Cove is off-limits, with its creepy Beast sightings and equally terrifying legends. But when a bullying incident sends twelve-year-old Nico Holland over a cliff and into Still Cove's icy waters, friends Tyler and Emma--and even Opal Walsh, who usually runs with the popular kids--rush to his rescue . . . and discover a mysterious island hiding in the murky, swirling mists below.

Though the island appears uninhabited, the kids can't shake a feeling that something about it is definitely not right. Their suspicions grow when they stumble upon an abandoned houseboat filled with all sorts of curiosities: odd-looking weapons, unnerving portraits, maps to unknown places, and a glass jar containing something completely unidentifiable. And in its lowest depths churns a dark, deep secret.

As the group delves deeper into this mysterious new clubhouse, their lives begin to intertwine in weird and dangerous ways. For something ancient has awakened . . . and it can detect not only their wishes and dreams, but also their darkest, most terrible imaginings. Do they have what it takes to face the shadowy secrets lurking within their own hearts?

Told from alternating points of view, this pulse-racing tale from bestselling duo Ally Condie and Brendan Reichs is the start of a high-stakes, thrilling series about friendship and believing in yourself--and each other.

Ally Condie is the author of the #1 New York Times bestselling Matched Trilogy and of the middle-grade novel Summerlost, a 2016 Edgar Award Finalist for Best Juvenile Mystery. A former English teacher, she lives with her husband and four children outside of Salt Lake City, Utah, and is the founder of the non-profit WriteOut Foundation.
allycondie.com
@AllyCondie

Brendan Reichs is the author of the instant New York Times bestseller Nemesis and its sequel Genesis, and co-author of the six-volume Virals series. Brendan is also a member of the Executive Board for both YALLFEST and YALLWEST literary festivals and has received a MFA in Creative Writing from the Vermont College of Fine Arts. He lives in Charlotte, North Carolina, with his wife, son, daughter, and a herd of animals that tear up everything.
brendanreichs.com
@BrendanReichs

"Move over, Stranger Things. . . The Darkdeep will pull you into an irresistibly eerie world beyond your wildest dreams--and nightmares." - Melissa de la Cruz, #1 New York Times bestselling author of The Descendants series

"The most fun I've had while being deeply terrified." - Roshani Chokshi, New York Times bestselling author of ARU SHAH AND THE END OF TIME

"Fast-paced, thrilling, and full of mystery--The Darkdeep will keep readers at the edge of their seats!" - Jennifer A. Nielsen, New York Times bestselling author of THE FALSE PRINCE

"[P]erfect for reluctant readers who appreciate things that go bump in the night." - Publishers Weekly

"Delivering plenty of middle-school shivers, . . . the terror of the figments is leavened with alternating bits of humor and pathos, and the ensemble cast is differentiated by motive and temperament, all of which augurs well for readerly interest in future adventures." - BCCB

"Swiftly paced and peppered with wit, this darkly entertaining tale is sure to engage horror fans." - School Library Journal

"Condie is at her best . . . grabbing readers’ interest from the first page." - starred review, Publishers Weekly on SUMMERLOST

"Have this on hand for readers who enjoy a sweet, heartfelt story." - School Library Journal on SUMMERLOST

"Addictive as a puzzle, moving with breakneck speed, Nemesis had me guessing until the very end. Try to predict what Nemesis is. I dare you." - Victoria Averyard, #1 NEW YORK TIMES bestselling author, on NEMESIS

"Hooked readers will be tapping their fingers waiting for the sequel." - starred review, Kirkus Reviews on NEMESIS

"Reichs builds plots like the Swiss build watches. Nemesis is a fascinating, twisty page-turner that will keep surprising you until its final page." - Ransom Riggs, #1 NEW YORK TIMES bestselling author, on NEMESIS