Inside the NRA: A Tell-All Account of Corruption, Greed, and Paranoia within the Most Powerful Political Group in America (CD-Audio) 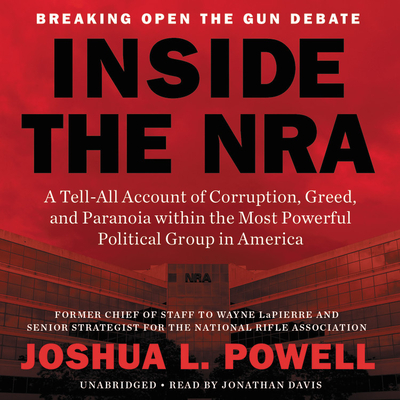 A shocking exposé of rampant, decades-long incompetence at the National Rifle Association, as told by a former member of its senior leadership.

Joshua L. Powell is the NRA--a lifelong gun advocate, in 2016, he began his new role as a senior strategist and chief of staff to NRA CEO Wayne LaPierre.

INSIDE THE NRA reveals for the first time the rise and fall of the most powerful political organization in America--how the NRA became feared as the Death Star of Washington lobbies and so militant and extreme as "to create and fuel the toxicity of the gun debate until it became outright explosive."

INSIDE THE NRA explains this intentional toxic messaging was wholly the product of LaPierre's leadership and the extremist branding by his longtime PR puppet master Angus McQueen. In damning detail, Powell exposes the NRA's plan to "pour gasoline" on the fire in the fight against gun control, to sow discord to fill its coffers, and to secure the presidency for Donald J. Trump.

From 2016 to 2019 Joshua L. Powell served as Senior Strategist to the NRA and Chief of Staff to NRA CEO Wayne LaPierre.