Confessions of a Barbarian (Paperback) 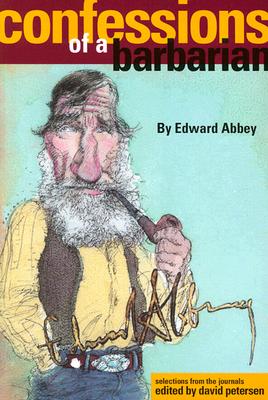 By Edward Abbey, David Petersen (Editor)
$20.00
On Our Shelves Now

Edward Abbey was an anarchist, activist, philosopher, and the spiritual father of the environmental movement. He was also a passionate journal keeper, a man who filled page after page with notes, philosophical musings, character sketches, illustrations, musical notations, and drawings. His "scribbling," as he called it, began in 1948, when he served as a motorcycle MP in postwar Italy, and continued until his death in 1989, totaling twenty-one volumes.

Few have cared more about American wilderness than the irascible Cactus Ed. Author of eco-classics such asThe Monkey Wrench GangandDesert Solitaire, Edward Abbey reveals all his rough-hewn edges and passionate beliefs in this witty, outspoken, maddening, and sometimes brilliant selection of journal entries that takes the writer from his early years as a park ranger and would-be literary author up to his death in 1989. Also included is a detailed index and original sketches made by Abbey himself.