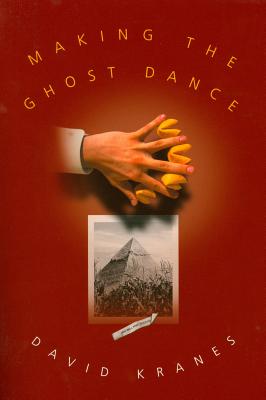 
On Our Shelves Now
Objects easily appear and disappear in Peck's hands, and so do people. Into the void, the young magician writes on a sheet of paper. What's supposed to happen doesn t and What's not supposed to happen does. That's all the sense he can make of life, and the uncertainty produces hilarious results. The theory of failed expectations if you can t control the outcome, then roll with it. And roll he does, all the way to Puerto Villarta, Corfu, and Paris letting life come to him rather than searching for the divination of secrets. In the end, he finds both.

For the record, I am in this book and you are in this book. When they make the movie, it's going to feature everybody. David Kranes writes from the marrow, and this novel is fierce and crammed with heart. It's cerebral and cinematic, and if feels like all of Kranes prose like something new and something old. A man loves his life in the ways he can, and Peck's ways are rich. I would say this book is about family and love and time. But it isn t about something, it is something If I were with you now, I d put it in your hand. Wait, fortune, it has already appeared So, now you ll see what I mean. Ron Carlson, author of A Kind of Flying.

David Kranes is an emeritus professor of English at the University of Utah. His novels includeKeno Runner"andMargins"; his short story, Cordials, won the 1996 Pushcart Prize, followed the next year byLow Tide in the Desert: Nevada Stories," which won the Western Heritage Award for Best Short Story. Two of his plays, Cantrell"andGoing In," were published inBest American Short Plays," 1987, andHoray"won the CBS Playwrights Award. He served for fourteen years as artistic director of the Sundance Playwrights Lab."