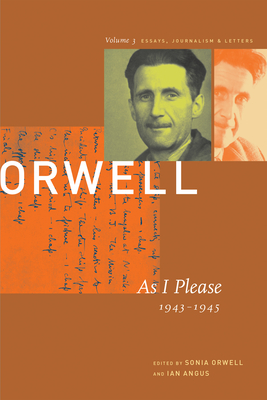 This is book number 3 in the Collected Essays series.

Essays, journalism and essays by the brilliant, indispensable George Orwell from 1943 to 1945. Even many decades after his death, the more we read of Orwell, the more clearly we can think about our world and ourselves.

During the Second World War, George Orwell was rejected for service and so became the literary editor, reviewer, and frequent columnist of the left-wing weekly, Tribune. "What I have most wanted to do," Orwell said, "is to make political writing into an art." And there is ample proof here that he achieve his ambition. Included in this volume are reviews of works by authors as varied as C. S. Lewis and Arthur Koestler, the newspaper column, "As I Please," and the brilliant essay, "A Nice Cup of Tea." Also included are letters to T. S. Eliot, among others, while trying to convince publishers to take a chance on a book called Animal Farm. This third volume of the Collected Essays, Journalism, and Letters by George Orwell will be enjoyed by anyone who believes that words can go a long way toward changing the world.