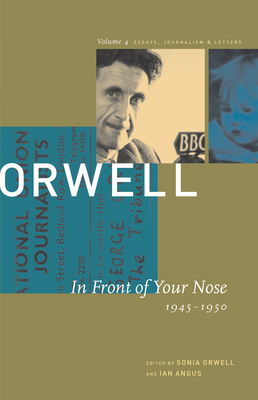 This is book number 4 in the Collected Essays series.

Essays, journalism and essays by the brilliant, indispensable George Orwell from 1946 to 1950. Even many decades after his death, the more we read of Orwell, the more clearly we can think about our world and ourselves.

In the years following the end of the Second World War, Orwell published many of his greatest essays: "You and the Atomic Bomb", "Politics and the English Language," "The Prevention of Literature," and "Why I Write." All these, and more, are included here--along with correspondence and other pieces that provide fascinating insight into his dystopian novel, Nineteen Eighty-Four. Big Brother, doublethink, thoughtcrime, newspeak, memory hole--all invented by Orwell to describe the workings of a totalitarian state. Orwell wrote his greatest novel while suffering from tuberculous and he died the year after its publication in 1950. This is collection of writing, however, creates the astonishing record of an imperishable mind. This fourth volume of the Collected Essays, Journalism, and Letters by George Orwell will be enjoyed by anyone who believes that words can go a long way toward changing the world.