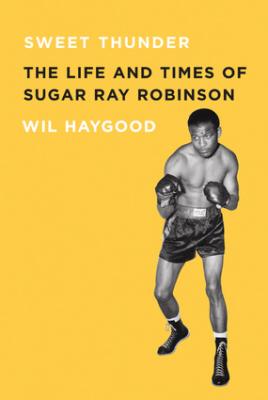 Sugar Ray Robinson was not only one of the most iconic figures of the fight game; almost all sportswriters agree that he was the greatest boxer of all time. This illuminating biography grounds the spectacular story of Robinson’s rise to greatness within the context of the fighter’s life and times. Born Walker Smith Jr. in 1921, Robinson’s early childhood was marked by the seething racial tensions and explosive race riots that infected the Midwest throughout the twenties and thirties. After his mother moved him and his sisters to the relative safety of Harlem, he came of age in the vibrant post-Renaissance years. It was there that--encouraged to box by his mother, who wanted him off the streets--he soon became a rising star, cutting an electrifying, glamorous figure, riding around town in his famous pink Cadillac. Beyond the celebrity, though, Robinson would emerge as a powerful, often controversial black symbol in a rapidly changing America.

From Robinson’s gruesome six-bout war with Jake “Raging Bull” LaMotta and his lethal meeting with Jimmy Doyle to his Harlem nightclub years and thwarted show-biz dreams, Haygood brings the champion’s story, in the ring and out, powerfully to life against a vividly painted backdrop of the world he captivated.

Wil Haygood is an award-winning author and journalist and a national reporter for the Washington Post. He is the author of The Haygoods of Columbus, In Black and White, and King of the Cats.

"For decades it seems, boxing scribes have fussed over one of the unending arguments: Who is, pound for pound, the best fighter of all time? Sugar Ray Robinson is always in that conversation. And should the topic ever pivot to the best writers about the sport, Haygood should be too." —Associated Press

"Haygood has given us a lot to ponder in this multi-layered biography about a complex man who epitomized so much of his era. For those who don't know the story, it will have plenty to teach, about style, grace, intelligence and heart." —New York Times Book Review

"Haygood's prose is highly stylized, with a self-conscious, jazzy rhythm, and it soars in places." —Toronto Globe and Mail

"Writing with grace about a figure as elegant and punishing as Sugar Ray Robinson is no mean feat, but Haygood's deft biography does a beautiful dance between the man and his times." —Minneapolis Star-Tribune

"Pound for pound, Sugar Ray Robinson was regarded as the best fighter in boxing during his career. Page for page, Haygood's biography is a dazzling read." —Newark Star-Ledger

"Were all of American history written with the style and passion Wil Haygood pumps into his dazzling biography of boxer Sugar Ray Robinson, college history departments would be stormed by eager students." —Pittsburgh Post-Gazette