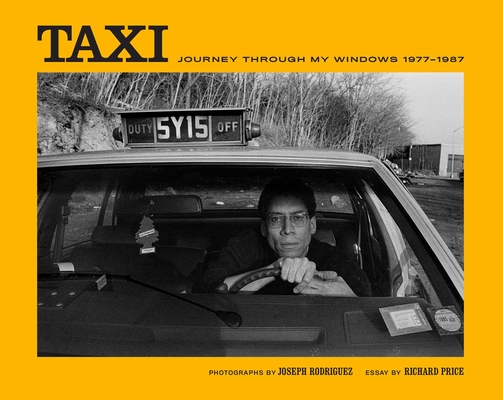 New York City in the late '70s was a collection of villages with its downtown scene, midtown workers, and uptown elegance. It was also a city that was more integrated than ever before or ever would be again. All of the city's humanity met in its streets with layered soundtracks of salsa, rock, disco, reggae, and soon hip-hop booming for all to groove to.

But, NYC was also a place of chaos and mayhem. Teetering on the brink of bankruptcy with rampant crime it was the city's drug users, dealers, and pimps and prostitutes who ruled the streets of Manhattan.

The grittiness of the city was a beacon and a promise to many outsiders, those who didn't quite fit into any mold, and a vibrant LGBTQ community became the nexus of an underworld of sex workers who liked to party. For a NYC cabbie such as Joseph Rodriguez, the hot spots to pick up fares were clubs like the Hellfire, Mineshaft, The Anvil, The Vault, and Show World.

Losing his first camera and lens in a classic '70s New York stabbing and mugging, Rodriguez's wounds healed and he armed himself with a new camera to document what he saw on the job: hookers getting off their shifts, transvestites and S&M partiers doin' it in the back seat or somehow pulling off an unlikely costume change from bondage gear to emerge from the cab clean-cut in an oxford and khakis ready to face unwitting family and friends.

A humanist at heart, his photographs speak of the dignity of the city's working class from all the boroughs and those struggling to get by.

Joseph Rodriguez was born and raised in Brooklyn, New York. He began studying photography at the School of Visual Arts and went on to receive an Associate of Applied Science degree at New York City Technical College. He worked in the graphic arts industry before deciding to pursue photography further. In 1985 he graduated with a Photojournalism and Documentary diploma from the International Center of Photography in New York. He went on to work for Black Star photo agency, and print and online news organizations like Esquire, The Guardian, Mother Jones, National Geographic, New America Media, The New York Times Magazine, Newsweek, Stern, and The Washington Post. He has received awards and grants from the New York Foundation for the Arts, Artists' Fellowship, USC Annenberg Institute for Justice and Journalism, the Open Society Institute Justice Media Fellowship and Katrina Media Fellowship, National Endowment for the Arts, the Rockefeller Foundation, Mother Jones International Fund for Documentary Photography, and the Alicia Patterson Fellowship Fund for Investigative Journalism. He has been awarded Pictures of the Year by the National Press Photographers Association and the University of Missouri, in 1990, 1992, 1996 and 2002. He is the author of Spanish Harlem, part of the “American Scene” series, published by the National Museum of American Art/ D.A.P., as well as East Side Stories: Gang Life in East Los Angeles, Juvenile, Flesh Life Sex in Mexico City, and Still Here: Stories After Katrina, published by powerHouse Books. Recent exhibitions include Galerie Bene Taschen, Cologne, Germany; Irene Carlson Gallery of Photography, University of La Verne, California; Third Floor Gallery, Cardiff, Wales, UK Institute for Public Knowledge, New York, NY; Moving Walls, Open Society Institute, New York, NY; and Cultural Memory Matters, 601 Art Space, New York, NY.

"New York City was a harder place back then, but Rodriguez’s frames manage to find a consistent human warmth."
— Brooklyn Magazine

"In any situation, Rodriguez is not a taxi driver who takes pictures, but a fearless, astute and inspired photographer who happens to drive a cab."
— Luc Sante

"Rodriguez’s black and white photographs diminish none of the colour and intensity of the city or its people as we catch fleeting glimpses of S&M club goers, homeless people, elderly couples, children playing in their neighbourhoods, and everyone in between."
— Megan Williams

"He remained true to documenting the delicate dance that is the human condition in action, and I am elated he did. Rodriguez understands that the camera is a pliant tool and not merely a mechanical tyrant – he has made it submissive to his highly mature vision and we have all benefited."
— Michael Ernest Sweet

"Similar to Walker Evans or other great social documentarians, he treats his subjects with dignity. 'The overarching mission of Joseph Rodriguez‘s work is to make visible those we choose not to see… to confront us with (their) everyday humanity.'"
— Emily Dinsdale

"The human is at the heart of his work, which often emerges after long periods of time spent gaining the trust of his subjects. The results are raw, grainy images full of life, revealing the resilience and beauty of the people he represents."
— Nicolas Daudin