Life Is a Miracle: An Essay Against Modern Superstition (Paperback) 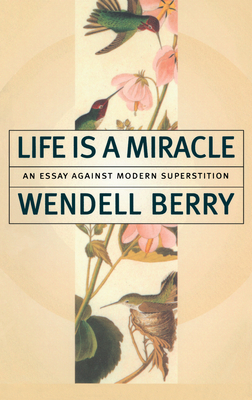 Life Is a Miracle: An Essay Against Modern Superstition (Paperback)


On Our Shelves Now
“[A] scathing assessment . . . Berry shows that Wilson's much–celebrated, controversial pleas in Consilience to unify all branches of knowledge is nothing more than a fatuous subordination of religion, art, and everything else that is good to science . . . Berry is one of the most perceptive critics of American society writing today.” —The Washington Post

“I am tempted to say he understands [Consilience] better than Wilson himself . . . A new emancipation proclamation in which he speaks again and again about how to defy the tyranny of scientific materialism.”—The Christian Science Monitor

In Life Is a Miracle, the devotion of science to the quantitative and reductionist world is measured against the mysterious, qualitative suggestions of religion and art. Berry sees life as the collision of these separate forces, but without all three in the mix we are left at sea in the world.
Wendell Berry is the author of fifty books of poetry, fiction, and essays. He was recently awarded the Cleanth Brooks Medal for Lifetime Achievement by the Fellowship of Southern Writers and the Louis Bromfield Society Award. For over forty years he has lived and farmed with his wife, Tanya, in Kentucky.