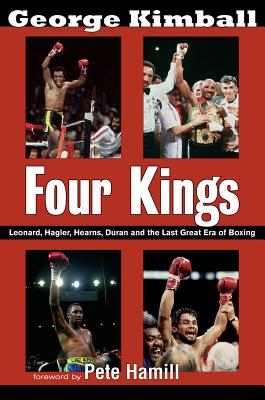 George Kimball was a sports columnist for the "Boston Herald" for 25 years. He was awarded the Nat Fleischer Award for Excellence in Boxing Journalism in 1985 from the Boxing Writers Association of America. He has covered nearly 400 world-title fights and is the author of "Only Skin Deep" and "Sunday's Fools." He lives in New York City.

"Kimball's accounts of the fights are riveting blow-by-blows, the "big event" context is palpably rendered, and each of the fighters re-emerges from the mists of memory as colorful and compelling as ever. Boxing fans . . . will savor Kimball's work."  Booklist

"Four Kings is a thriller and George Kimball a prince among sportswriters . . .  an epic poem of a book, a book that lifts the heart."  Frank McCourt, author, Angela's Ashes,'Tis, and Teacher Man

"A a terrific book. Kimball was there and never missed a moment of it. His account of the fighters, the fights and the colorful supporting players is rich with insights and details."  Vincent Patrick, author, The Pope of Greenwich Village and Family Business

"Very accurate and well-researched . . . a phenomenon . . . well-written. I couldn't put it down. I loaned it to a friend and he won't give it back"  Emanuel Steward, World Champion Boxing trainer

"George Kimball is one of America's best-loved sportswriters and Four Kings shows why. With skill, grace and humor, he brings to life a remarkable era and four uniquely gifted athletes."  Jeremy Schaap, ESPN reporter and author, Cinderella Man: James J. Braddock, Max Baer and the Greatest Upset in Boxing History

"Kimball writes with insight and humor. The bigger the fight, the better he tells it."  Thomas Hauser, author, Muhammad Ali: His Life and Times