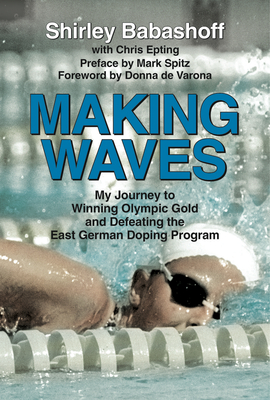 In her extraordinary swimming career, Shirley Babashoff set thirty-nine national records and eleven world records. Prior to the 1990s, she was the most successful U.S. female Olympian and, in her prime, was widely considered to be the greatest female swimmer in the world.
Heading into the 1976 Olympic Games in Montreal, Babashoff was pictured on the cover of Sports Illustrated and followed closely by the media. Hopes were high that she would become the female Mark Spitz.
All of that changed once Babashoff questioned the shocking masculinity of the swimmers on the East German women's team. Once celebrated as America's golden girl, Babashoff was accused of poor sportsmanship and vilified by the press with a new nickname: Surly Shirley.
Making Waves displays the remarkable strength and resilience that made Babashoff such a dynamic champion. From her difficult childhood and beginnings as a determined young athlete growing up in Southern California in the 1960s, through her triumphs as the greatest female amateur swimmer in the world, Babashoff tells her story in the same unflinching manner that made her both the most dominant female swimmer of her time and one of the most controversial athletes in Olympic history.

Shirley Babashoff is an American Olympic champion swimmer. In her extraordinary career, she set six world records and thirty-seven national records and earned a total of eight individual Olympic medals. She won a gold medal in the 400-meter freestyle relay in both the 1972 and 1976 Olympics, and four silver medals in the 4 x 100 meter medley relay and the 200-meter, 400-meter and 800-meter freestyle. She also won the 1975 world championship in both the 200-meter and 400-meter freestyle. Prior to the 1990s, she was the most successful U.S. female Olympian and, in her prime, was widely considered to be the greatest female swimmer on the planet. Babashoff is perhaps best remembered for swimming the anchor leg on the gold-medal winning 4x100-meter freestyle relay team in its victory over the steroid-plagued 1976 East German women, in what is widely acknowledged to be the single greatest race in the history of women's swimming. She was inducted to the International Swimming Hall of Fame as an "Honor Swimmer" in 1982. Babashoff lives in Fountain Valley, California, where she has been a letter carrier for the U.S. Postal Service for nearly thirty years. Chris Epting is the author of 25 travel/history books, including "James Dean Died Here, Roadside Baseball, " and "Led Zeppelin Crashed Here." He is also an award-winning travel writer and has contributed articles for such publications as the "Los Angeles Times, Westways, " and "Travel + Lesiure" magazine, and writes a weekly newspaper column for the Huntington Beach Independent. Originally from New York, Chris now lives in Huntington Beach, California with his wife and their two children. Donna de Varona is an American Olympic swimmer who set eighteen world records and won multiple gold medals during her career. In 1964, the Associated Press and United Press International voted de Varona the Most Outstanding Woman Athlete in the World. After retiring from swimming, de Varona became a sports broadcaster. At the age of 17, she appeared on ABC s Wide World of Sports, becoming the youngest and one of the first women sportscasters for a national network. Her groundbreaking career has earned her an Emmy, two Gracies, and the opportunity to cover seventeen winter and summer Olympic games. She was inducted to the International Swimming Hall of Fame as an "Honor Swimmer" in 1969.