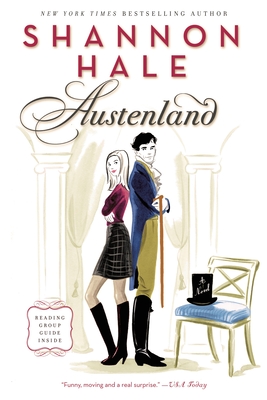 Jane Hayes is a young New Yorker with a real romantic problem: no man she meets can compare to her one true love—Mr. Darcy from Jane Austen’s Pride and Prejudice. But when a wealthy relative bequeaths her a trip to an English resort for Austen fanatics, Jane's fantasies of meeting the perfect Regency-era gentleman suddenly become realer than she ever could have imagined.

Dressed in empire waist gowns and torn between a sexy gardener and an actor playing the brooding Darcy role, Jane finds herself mastering the rules of etiquette and of the resort’s flirtatious games. But when it’s time to bid Austenland goodbye, can Jane really leave her fantasies—and the two men who’ve played into them—behind?

In this addictive, charming, and entirely delightful story, Shannon Hale brings out the Jane Austen obsessive in all of us.

"Adorable! This is the best tribute to obsessed Austen freaks (like me) that I’ve ever read." - Stephenie Meyer, New York Times bestselling author of the TWILIGHT series

"An homage to Austen… Austenland offers hope that after years of fruitless searching for a companion, just when you’re ready to give up on love, it will find you on its own." - Houston Chronicle

"Allow me to direct you to the best Austen tribute since Karen Joy Fowler's The Jane Austen Book Club: Shannon Hale's clever and imaginative Austenland... Hale's charming first book for adults is chick lit with soul. Though there's a laugh on nearly every page--Hale, like Austen, is adept at subtly skewering the ridiculous—there's also the more serious story of a woman learning the difference between fantasy and reality, and discovering that real life can be better than your dreams. Is there a better message for a summer read?" - Bookpage