The Finest Line: The Global Pursuit of Big-Wave Surfing (Hardcover) 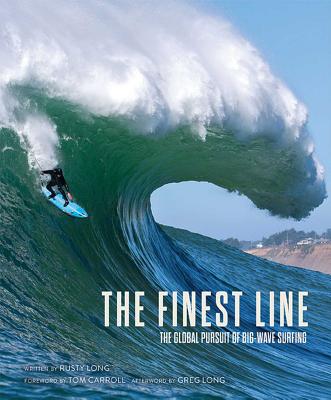 The Finest Line explores the world of big-wave surfing and it’s dynamic evolution. Through images of hallmark days from the best big-wave locations around the world, firsthand accounts from those who dedicate their lives to chasing and riding giant waves, and expert commentary about the treacherous characteristics of each location, The Finest Line offers an unprecedented glimpse into the psychology of big-wave surfing, as well as its extreme risks and unparalleled rewards.

Big-wave surfing has long been a part of the sport, but this subculture of the surf world is now moving out of the fringes. The current generation of surfers is continually reinventing the limits, making this the most advanced, dynamic, and exciting period in big-wave surfing history.

This stunning coffee table book captures the essence of the sport through breathtaking images and stories, as well as exclusive interviews with the surfers who play the starring roles during these rare, large-swell events. Here you discover the complex logistics behind staging missions to the Cortes Bank, a phantom reef 100 miles out to sea; the mental and physical regimens of surfers such as Shane Dorian, Greg Long, and Grant “Twiggy” Baker; the psychology of living in pursuit of the world’s meanest waves; the stories behind the paddle-in renaissance that has come to define the next level of big-wave surfing; and firsthand accounts of those now-rare “tow-only” days that captivate audiences worldwide.

More than a collection of big-wave photographs, The Finest Line covers the giant, hallmark sessions from the most impressive spots around the globe, capturing the international flavor of the sport and exploring the insatiable drive of a rare breed of thrill seekers.

Rusty Long has been fully involved in professional big-wave surfing since 2000. He has been a finalist in multiple Big Wave World Tour events, is a multiple-time nominee of the Billabong XXL Global Big Wave Awards, and is an annual invitee to the Quiksilver in Memory of Eddie Aikau contest as well as the Mavericks Invitational. He has published surf, travel, and lifestyle features in The Surfer’s Journal, Surfer, online surf-media outlets, and Men’s Journal. He lives in San Clemente, CA.

Greg Long is widely considered the foremost ambassador of the big-wave surf scene. He has won every major big-wave event, including the Quiksilver in Memory of Eddie Aikau and the Mavericks Invitational, as well as multiple Billabong XXL Global Big Wave Awards. Additionally, he worked as both an actor and advisor on the Hollywood feature film Chasing Mavericks. His passion, drive, and accomplishments have helped carry the pursuit of big-wave surfing to new levels worldwide. He lives in San Clemente, CA.

Tom Carroll is among the most revered figures in surfing. He is a two-time ASP World Tour champion, an annual invitee to the Quiksilver in Memory of Eddie Aikau contest at Waimea Bay, a three-time winner of the Pipe Masters, and an innovator of modern pow