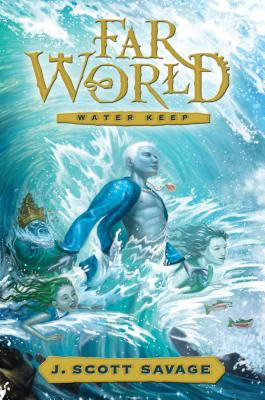 This is book number 1 in the Farworld series.

Even though ­thirteen-­year-­old Marcus Kanenas is confined to a wheelchair, he sees himself as a survivor and a dreamer. In fact, his favorite dream is of a world far away, a world where magic is as common as air, where animals tell jokes, and where trees beg people to pick their fruit. He even has a name for this place--­Farworld.

When Marcus magically travels to Farworld, he meets Kyja, a girl without magic in a world where spells, charms, and potions are everywhere, and Master Therapass, a master wizard who has kept a secret hidden for thirteen years, a secret that could change the fate of two ­worlds.

But the Dark Circle has learned of Master Therapass's secret and their evil influence and power are growing. Farworld's only hope is for Marcus and Kyja to find the mythical ­Elementals--­water, land, air, and ­fire--­and convince them to open a drift between the ­worlds.

As Kyja and Marcus travel to Water Keep, they must face the worst the evil Dark Circle can throw at them--­Summoners, who can command the living and the dead; Unmakers, invisible creatures that can destroy both body and soul; and dark mages known as Thrathkin S'Bae.

Along the way, Marcus and Kyja will discover the truth about their own heritage, the strength of their friendship, and the depths of their unique ­powers.

J. Scott Savage is the author of the Farworld middle grade fantasy series and the Case File 13 middle grade monster series. He has been writing and publishing books for over ten years. He has visited over 400 elementary schools, dozens of writers conferences, and taught many writing classes. He has four children and lives with his wife Jennifer and their Border Collie, Pepper, in a windy valley of the Rocky Mountains.