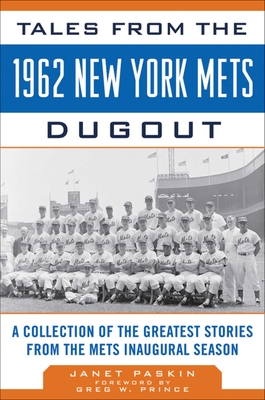 
Special Order
The most memorable stories from one of baseball’s most memorable teams. Led by manager Casey Stengel, the team of Marv Thorneberry, Don Zimmer, Choo Choo Coleman, Al Jackson launched the Mets in a way no one would have expected but everyone wants to remember.

A must-read book for any Mets fan, for any baseball fan, for every New Yorker!
Greg W. Prince is cocreator of the blog Faith and Fear in Flushing, the daily destination for “Mets fans who like to read” since 2005. His memoir of the same name—“an intense personal history of the New York Mets”—was published in 2009 and was followed in 2016 by Amazin’ Again: How the 2015 New York Mets Brought the Magic Back to Queens. He has written about baseball for the New York Times, Huffington Post, Yahoo! Sports, and ESPN.com; served as a consultant to the film The Last Play at Shea; and helped organize the New York Mets 50th Anniversary conference at Hofstra University. He lives in Baldwin, New York.