More than Beards, Bellies and Biceps: The Story of the 1993 Phillies (And the Phillie Phanatic Too) (Hardcover) 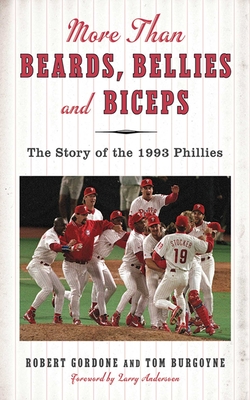 More than Beards, Bellies and Biceps: The Story of the 1993 Phillies (And the Phillie Phanatic Too) (Hardcover)


Email or call for price.
Stubble scruffed up their chins. Tobacco wads ballooned their cheeks. The 1993 Philadelphia Phillies had the look of a slow-pitch softball team itching to kick some serious butt. They did kick butt, too, on and off the field. “They lived the life of professional baseball players as fully as it can be done,” manager Jim Fregosi said. Though they weren’t a photogenic bunch, their mugs were everywhere, on Baseball Today, on David Letterman, and on Saturday Night Live. Even President Clinton quipped about them. The newly revised edition of Robert Gordon’s and Tom Burgoyne’s More Than Beards, Bellies, and Biceps: The Story of the 1993 Phillies tells the complete story of this gang of baseball throwbacks that quickly seduced the hometown fans. By season’s end they had won over the rest of the country, too. America’s Most Wanted Team became America’s Team in a heart-thumping World Series against Toronto. The ’93 Phils drew more spectators than any other Philadelphia franchise in the city’s century-and-a-quarter of professional sports. More Than Beards, Bellies, and Biceps offers the story of a team that burned the candle at both ends and lit up a city like a firecracker.
Bob Gordon has written for major publications in the United States and England. His previous works include books about beloved, overachieving Philadelphia teams like the 1960 Eagles, the 1993 Phillies, and the 1985 Villanova Wildcats. He is also a professional engineer with a successful consulting business, respected travel and restaurant writer, humor columnist, French tutor, and guitar teacher/performer.