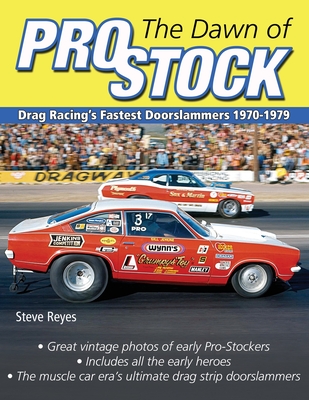 Pro Stock is a unique class of racing, and one that has changed considerably over the years. In its early years, Pro Stock was similar to the Super Stock era from a decade before, in that it featured cars that seemed to be a lot like a hot rod version of what people were driving on the street. While the engines were a little bigger and nastier than most street versions, they were not that far removed, and fans could really relate to cars like 'Cudas, Mustangs, Camaros, Mavericks, and Vegas going at it on Sunday afternoon. These mostly stock-bodied cars were, after all, what most fans wanted their own street version to be.

Over the years, as always seems to happen in racing, the original vision morphs into something completely different, and in the case of Pro Stock, that meant tube frames and flip-up fiberglass bodies that resemble nothing seen on the street. And in that, there becomes a little bit of a disconnect with the fans, whose interest in Pro Stock originated in the relative stock appearance of the cars. For this reason The Dawn of Pro Stock by Steve Reyes is a celebration of the early years, when fans could really connect with the cars, and brand rivalries were intense.

Legendary drag racing photographer Reyes was trackside at the biggest and best NHRA events from the mid 1960s throughout the 1990s. He had a unique perspective on the development of Pro Stock, as he was able to document the evolution of both the cars and drivers as he observed them throughout the season. For a genuine insider's view, Steve has gotten together his very best shots and supplemented them with some great images from his contemporaries to offer this new collection. Steve's own observations punctuate the outstanding images to give the reader a trackside view of Pro Stock's early days unlike any offered before.