Seized by the Sun: The Life and Disappearance of World War II Pilot Gertrude Tompkins (Women of Action #19) (Hardcover) 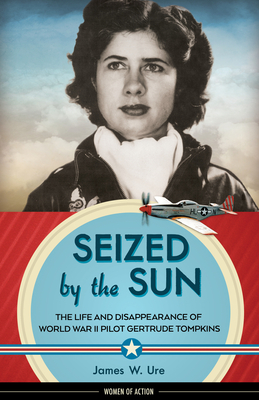 Seized by the Sun: The Life and Disappearance of World War II Pilot Gertrude Tompkins (Women of Action #19) (Hardcover)


On Our Shelves Now
Of the 38 Women Airforce Service Pilots (WASPs) confirmed or presumed dead in World War II, only one—Gertrude “Tommy” Tompkins—is still missing. On October 26, 1944, the 32-year-old fighter plane pilot lifted off from Mines Field in Los Angeles. She was never seen again.

Seized by the Sun is the story of a remarkable woman who overcame a troubled childhood and the societal constraints of her time to find her calling flying the fastest and most powerful airplane of World War II. It is also a compelling unsolved mystery.

Born in 1912 to a wealthy New Jersey family, Gertrude’s childhood was marked by her mother’s bouts with depression and her father’s relentless search for a cure for the debilitating stutter that afflicted Gertrude throughout her life. Teased and struggling in school, young Gertrude retreated to a solitary existence. As a young woman she dabbled in raising goats and aimlessly crisscrossed the globe in an attempt to discover her purpose.

As war loomed in Europe, Gertrude met the love of her life, a Royal Air Force pilot who was killed flying over Holland. Telling her sister that she “couldn’t stop crying, so she focused on learning to fly,” Gertrude applied to join the newly formed Women’s Air Force Service Pilots. She went on to become such a superior pilot that she was one of only 126 WASPs selected to fly fighter planes. After her first flight in the powerful P-51 Mustang, her stutter left her for good.

Gertrude’s sudden disappearance remains a mystery to this day. Award-winning author Jim Ure leads readers through Gertrude’s fascinating life; provides a detailed account of the WASPs’ daily routines, training, and challenges; and describes the ongoing search for Gertrude’s wreck and remains. The result of years of research and interviews with Gertrude’s family, friends, and fellow WASPs, Seized by the Sun is an invaluable addition to any student’s or history buff’s bookshelf.
James W. Ure is a former staff writer and editor at the Salt Lake Tribune and wrote features for the Deseret News, as well as other newspapers and magazines. He is also a former publicist and executive director of the Sundance Film Festival. He lives in Salt Lake City, Utah.
“Seized by the Sun is a compelling slice of Americana and a wonderfully detailed glimpse at life in the WASPs from the perspective of a privileged yet tortured young woman.” —Kathryn J. Atwood, author of Women Heroes of World War II


“Part concise history of the WASPs and part unsolved mystery, Seized by the Sun is a long-overdue tribute to a determined and talented young woman as her identity changes from a shy and stuttering society girl to a confident military pilot. A deftly reported, shining portrait of an inspirational woman.” —Elizabeth Wein, award-winning author of Code Name Verity and Rose Under Fire