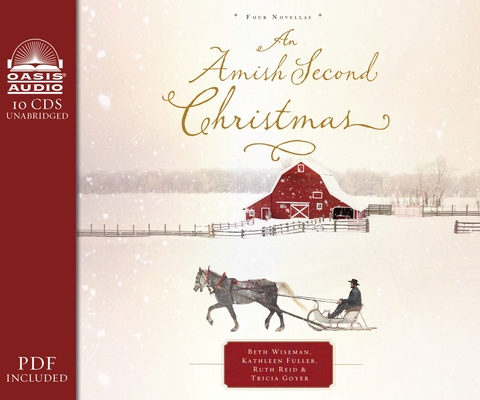 Second Christmas is a time of family, fun, and tradition in Amish communities. Come celebrate this special time with four heartwarming Amish romances.

When Christmas Comes Again, by Beth Wiseman:
Katherine knows the first Christmas without Elias will be hard for her and the children. But when a mysterious Englischer appears with photographs of her late husband, Katherine begins to wonder what other blessings Christmas could have in store.

A Gift for Anne Marie, by Kathleen Fuller:
Anne Marie and Nathaniel have been best friends since they were kids. Now things are evolving . . . in ways everyone else predicted long ago. But when her mother suddenly decides to remarry in another state, Anne Marie’s new chapter with Nathaniel looks doomed to end before it begins.

Her Christmas Pen Pal, by Ruth Reid:
Joy was expecting a wedding proposal from Henry — what she got instead was news of another woman. But when her heartfelt letter to a cousin ends up in the hands of a young cabinetmaker, an unexpected correspondence between two strangers gets interesting fast.

The Christmas Aprons, by Tricia Goyer:
Vanilla crumb pie has been Esther’s mem’s calling card for decades. But when Esther finally gets her hands on the secret recipe, she discovers that vanilla crumb pie is more than just dessert . . . it’s bachelor bait.

Award-winning, bestselling author Beth Wiseman is best known for her Amish novels, but she has also written several successful contemporary novels, set primarily in her beloved Texas, inlcuding Need You Now and The House that Love Built. Both have received glowing reviews. Beth's The Promise is inspired by a true story. Website: www.bethwiseman.com

Kathleen Fuller is the author of several bestselling novels, including A Man of His Word and Treasuring Emma, as well as a middle-grade Amish series, The Mysteries of Middlefield. Website: www.kathleenfuller.com

Ruth Reid is a CBA and ECPA best-selling author of the Heaven on Earth series. She's a full-time pharmacist who resides in Florida with her husband and three children.

USA Today best-selling author Tricia Goyer is the author of 35 books, including the three-book Seven Brides for Seven Bachelors series. She has written over 500 articles for national publications and blogs for high traffic sites like TheBetterMom.com and MomLifeToday.com. Tricia and her husband John live in Little Rock, Arkansas where John works for FamilyLife. They have six children.