Lysistrata and Other Plays: The Acharnians, the Clouds, Lysistrata (Penguin Classics) (Prebound) 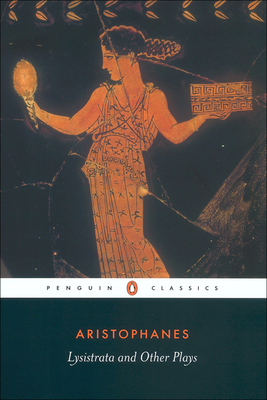 Lysistrata and Other Plays: The Acharnians, the Clouds, Lysistrata (Penguin Classics) (Prebound)


Usually ships to store in 2-3 Days
Three plays by the comedian of Ancient Greece
Writing at the time of political and social crisis in Athens, Aristophanes was an eloquent yet bawdy challenger to the demagogue and the sophist." The Achanians" is a plea for peace set against the background of the long war with Sparta. In "Lysistrata "a band of women tap into the awesome power of sex in order to end a war. The darker comedy of "The Clouds" satirizes Athenian philosophers, Socrates in particular, and reflects the uncertainties of a generation in which all traditional religious and ethical beliefs were being challenged.

For more than seventy years, Penguin has been the leading publisher of classic literature in the English-speaking world. With more than 1,700titles, Penguin Classics represents a global bookshelf of the best works throughout history and across genres and disciplines. Readers trust theseries to provide authoritative texts enhanced by introductions and notes by distinguished scholars and contemporary authors, as well as up-to-datetranslations by award-winning translators.

Aristophanes was born, probably in Athens, c. 449 BC and died between 386 and 380 BC. Little is known about his life, but there is a portrait of him in Plato's "Symposium." He was twice threatened with prosecution in the 420s for his outspoken attacks on the prominent politician Cleon, but in 405 he was publicly honored and crowned for promoting Athenian civic unity in" The Frogs." Aristophanes had his first comedy produced when he was about twenty-one, and wrote forty plays in all. The eleven surviving plays of Aristophanes are published in the Penguin Classics series as "The Birds and Other Plays," "Lysistrata and Other Plays," and "The Wasps/The Poet" and the "Women/The Frogs."

Alan H. Sommerstein is head of the classics department at Nottingham.