Proving History: Bayes's Theorem and the Quest for the Historical Jesus (Hardcover) 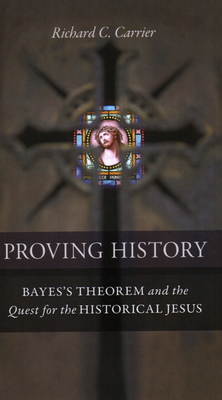 Proving History: Bayes's Theorem and the Quest for the Historical Jesus (Hardcover)


Usually ships to store in 2-3 Days
This in-depth discussion of New Testament scholarship and the challenges of history as a whole proposes Bayes’s Theorem, which deals with probabilities under conditions of uncertainty, as a solution to the problem of establishing reliable historical criteria. The author demonstrates that valid historical methods—not only in the study of Christian origins but in any historical study—can be described by, and reduced to, the logic of Bayes’s Theorem. Conversely, he argues that any method that cannot be reduced to this theorem is invalid and should be abandoned.

Writing with thoroughness and clarity, the author explains Bayes’s Theorem in terms that are easily understandable to professional historians and laypeople alike, employing nothing more than well-known primary school math. He then explores precisely how the theorem can be applied to history and addresses numerous challenges to and criticisms of its use in testing or justifying the conclusions that historians make about the important persons and events of the past. The traditional and established methods of historians are analyzed using the theorem, as well as all the major "historicity criteria" employed in the latest quest to establish the historicity of Jesus. The author demonstrates not only the deficiencies of these approaches but also ways to rehabilitate them using Bayes’s Theorem.

Anyone with an interest in historical methods, how historical knowledge can be justified, new applications of Bayes’s Theorem, or the study of the historical Jesus will find this book to be essential reading.
Richard C. Carrier, an independent scholar with a doctorate in ancient history from Columbia University, is the author of Why I Am Not a Christian: Four Conclusive Reasons to Reject the Faith; Not the Impossible Faith: Why Christianity Didn’t Need a Miracle to Succeed; and Sense and Goodness without God: A Defense of Metaphysical Naturalism. He has also contributed chapters to The End of Christianity, edited by John W. Loftus; Sources of the Jesus Tradition: Separating History from Myth, edited by R. Joseph Hoffmann; The Christian Delusion: Why Faith Fails, edited by John W. Loftus; and The Empty Tomb: Jesus beyond the Grave, edited by Robert Price and Jeffery Lowder.
"[C]arefully exposes what happens when sound methodology meets biblical studies. . . . Proving History is a brilliant lesson in the proper proportioning of belief to evidence. Even minimal attention to Bayesian probability theory reveals just how much of Jesus scholarship confuses ‘possibly true’ with ‘probably true.’ The only miracle Richard Carrier has left to explain is why so few appreciate that extraordinary claims require extraordinary support."
-Dr. Malcolm Murray, Author of The Atheist’s Primer

"Carrier applies his philosophical and historical training to maximum effect in outlining a case for the use of Bayes’s Theorem in evaluating biblical claims. Even biblical scholars, who usually are not mathematically inclined, may never look at the ‘historical Jesus’ the same way again."
-Dr. Hector Avalos, Professor of religious studies, Iowa State University, and author of , The End of Biblical Studies