Navigating Grace: A Solo Voyage of Survival and Redemption (Paperback) 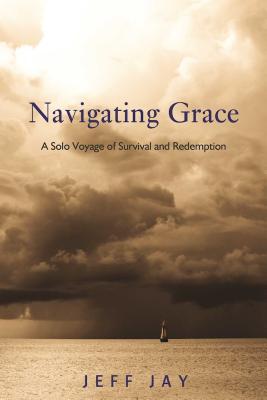 A moving illustration of the power of grace to elevate us during troubling times, Jeff Jay offers a soulful account of his solo sailing journey that turned into a battle for survival on the open sea.

Jeff Jay’s recent life was full of tragedy: his marriage had ended, his father had passed away, his brother had committed suicide, and Jeff’s own alcoholism had taken him to the edge of death.

In his desire for a fresh start, Jeff set out on a solo adventure by sea on an old sloop named Lifeboat. It ultimately became a journey of personal transformation. He cast off in Annapolis, Maryland, with an eye toward the Caribbean. Finally able to breathe, Jeff relaxed into his first day sailing the Atlantic when a dark winter storm descended, tossing him into a week-long fight for survival on the open sea. As he faced the realization that only divine intervention could deliver him from certain death, Jeff desperately called on the deity that had intervened in the darkest hours of his addiction years earlier.

An intensely personal testimony to calling on the power of grace in our darkest hours, Jeff’s is a beautifully written tale of far-fetched dreams, desperate prayers, and those miraculous moments that change our lives forever.

Jeff Jay is a certified addiction specialist, popular speaker and consultant, and co-author with Debra Jay of the best-selling book Love First. His work has appeared on CNN, The Jane Pauley Show, PBS, Forbes Online and numerous professional journals. He is a graduate of the University of Minnesota, and has served as president of the Terry McGovern Foundation in Washington, DC, and as trustee for several clinical and professional organizations.