This Light of Ours: Activist Photographers of the Civil Rights Movement (Hardcover) 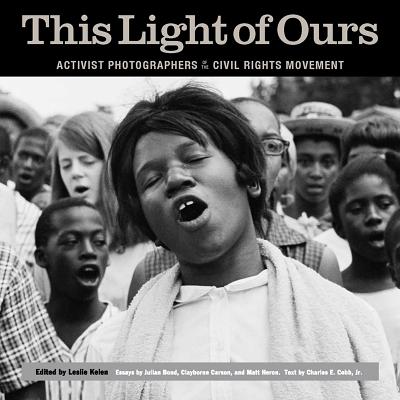 This Light of Ours: Activist Photographers of the Civil Rights Movement (Hardcover)


Email or call for price
This Light of Ours: Activist Photographers of the Civil Rights Movement is a paradigm-shifting publication that presents the Civil Rights Movement through the work of nine photographers who participated in the movement as activists with SNCC, SCLC, and CORE. Unlike images produced by photojournalists, who covered breaking news events, these photographers lived within the movement--primarily within the Student Nonviolent Coordinating Committee (SNCC) framework--and documented its activities by focusing on the student activists and local people who together made it happen. The core of the book is a selection of 150 black-and-white photographs, representing the work of photographers Bob Adelman, George Ballis, Bob Fitch, Bob Fletcher, Matt Herron, David Prince, Herbert Randall, Maria Varela, and Tamio Wakayama. Images are grouped around four movement themes and convey SNCC's organizing strategies, resolve in the face of violence, impact on local and national politics, and influence on the nation's consciousness. The photographs and texts of This Light of Ours remind us that the movement was a battleground, that the battle was successfully fought by thousands of "ordinary" Americans among whom were the nation's courageous youth, and that the movement's moral vision and impact continue to shape our lives.
Leslie G. Kelen is executive director of the Center for Documentary Arts. He is author of several books, including Faces and Voices of Refugee Youth; Streaked with Light and Shadow: Portraits of Former Soviet Jews in Utah; and Missing Stories: An Oral History of Ethnic and Minority Groups in Utah.