Not in the Script: An If Only novel (If Only...) (Paperback) 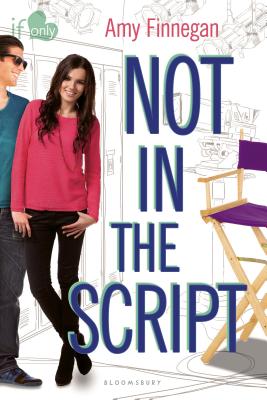 Not in the Script: An If Only novel (If Only...) (Paperback)

Enjoy Not in the Script and the other standalone titles in Bloomsbury's contemporary If Only romance line centered around an impossible problem: you always want what you can't have!

Millions of people witnessed Emma Taylor's first kiss-a kiss that needed twelve takes and four camera angles to get right. After spending years performing on cue, Emma can't help but wonder if any part of her life is real anymore . . . particularly her romances. She's been burned by heartthrobs (and the press) one too many times, but there's something about Emma's co-star on her new TV show Coyote Hills that is irresistible. Jake Elliott is gorgeous, smart and actually cares about Emma's charitable foundation. But she's sworn off on-set relationships. They always end badly . . . don't they?

This third novel in the deliciously fun If Only romance line proves that the best kinds of love stories don't follow a script.

AMY FINNEGAN writes her own stories because she enjoys falling in love over and over again, and thinks everyone deserves a happy ending. She likes to travel the world-usually to locations where her favorite books take place-and owes her unquenchable thirst for reading to Jane Austen and J.K. Rowling. Not in the Script came about after hearing several years of behind-the-scenes stories from her industry veteran brother. She's also been lucky enough to visit dozens of film sets and sit in on major productions such as Parks and Recreation and Parenthood. This is Amy's debut novel.

“Realistic and relatable . . . Emma's wit and humor will keep readers with her right until the end.” —School Library Journal

“Emma and Jake come across as attractive not just in looks, but in personality too, and the rest of the cast provide spice. Readers who've logged plenty of Disney Channel hours should enjoy this inside look at celebrity life.” —Kirkus Reviews

“Finnegan adds dimension to the story by focusing on Emma's relationships with her female friends (and frenemies), in addition to her romantic entanglements . . . A breezy romance that should have appeal, particularly, for younger teens.” —Booklist

“Readers looking for a light and entertaining book with just enough drama and a happy ending will gravitate to this, the third in the If Only series.” —VOYA