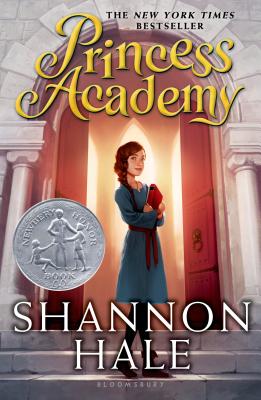 In this first book in New York Times bestselling, Newbery Honor-winning author Shannon Hale's Princess Academy series, Miri finds herself a sudden participant in a contest to find the next princess of the realm.

Miri lives on a mountain where, for generations, her ancestors have lived a simple life. Then word comes that the king's priests have divined her village the home of the future princess. In a year's time, the prince will choose his bride from among the village girls.

The king's ministers set up an academy on the mountain, and every teenage girl must attend and learn how to become a princess. Soon Miri finds herself confronted with a harsh academy mistress, bitter competition among the girls, and her own conflicting desires. Winning the contest could give her everything she ever wanted--but it would mean leaving her home and family behind.

Don't miss any of these other books from New York Times bestselling author Shannon Hale:

Book of a Thousand Days

For Adults
Austenland
Midnight in Austenland
The Actor and the Housewife

“Shannon Hale's books reignite my love of reading--that joy of having the time of my life with a great story.” —Stephenie Meyer, author of Twilight

“This is not a fluffy, predictable fairy tale . . . . Instead Hale weaves an intricate, multilayered story about families, relationships, education, and the place we call home.” —School Library Journal, starred review

“The book is a fresh approach to the traditional princess story with unexpected plot twists and great emotional resonance.” —2006 Newbery Committee

“Palace of Stone . . . proves once again that with quick wit and brave words, one person really can change the world.” —School Library Journal on Princess Academy: Palace of Stone

“This is not a fluffy, predictable fairy tale....Instead Hale weaves an intricate, multilayered story about families, relationships, education, and the place we call home.” —SLJ, starred review for PRINCESS ACADEMY

“Palace of Stone . . . proves once again that with quick wit and brave words, one person really can change the world.” —SLJ on Palace of Stone