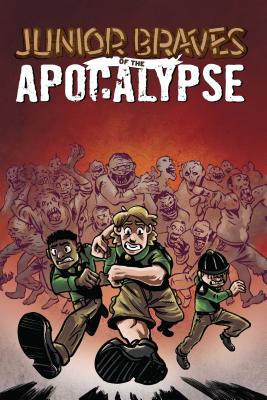 The Junior Braves of Tribe 65 return from a camping trip to find swarms of bloodthirsty mutants have overrun their town, bringing death and destruction everywhere they go! With their families missing and their homes destroyed, these plucky kids must use all their scouting talents, combined smarts, and teamwork to survive the end of the world!

JUNIOR BRAVES OF THE APOCALYPSE VOL. 1: A BRAVE IS BRAVE is the beginning of the exciting young adult graphic novel series that is one part THE GOONIES and one part THE WALKING DEAD, full of zombies, adventure, and handy tips for wilderness survival—in a new softcover format!

Michael Tanner was born in Great Falls, Montana—a thriving metropolis that is actually smaller than the neighborhood of Los Angeles that he currently resides in. He has a BA in Theater and Television Production from the Evergreen State College, which is also where he met Greg Smith. Michael developed a love for comics at a very early age and credits the medium with expanding his vocabulary and imagination. His first published comic work was in the Oni Press anthology Jam! Tales from the World of Roller Derby. He feels incredibly lucky to have been given the opportunity to work in a field that he loves.

Gregory K. Smith grew up in a culturally diverse household. He was smitten with books at an early age when his Assistant Librarian mother brought him to work during summer breaks. Later, his father got him into Boy Scouts, where he achieved Eagle Scout Rank.

Zach Lehner graduated from the Savannah College of Art and Design in 2008 with a B.A. in Sequential Art and again with a Masters in 2010. This is his first graphic novel. He lives in northern Chicago, where he reads a lot of books.