Gordie Howe's Son: A Hall of Fame Life in the Shadow of Mr. Hockey (Paperback) 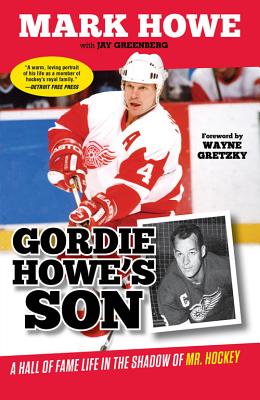 Mark Howe emerged from the shadow cast by his iconic father Gordie to achieve greatness. In this autobiography, he vividly describes his unparalleled experiences. A U.S. Olympic silver medalist at age 16, and a member of the Memorial Cup champion Toronto Marlboros, Howe went on to play seven seasons alongside his father, Gordie, and brother, Marty, for the WHA's two-time champion Houston Aeros and New England and Hartford Whalers before becoming a four-time NHL All-Star with the Philadelphia Flyers. Howe, elected to the Hockey Hall of Fame in 2011, recounts the joys and travails endured by the sport's most beloved family. Recollections of teammates, injuries, game experiences, deaths, and his life as a child athlete make this a must-read for all hockey fans.

Mark Howe is a three-time NHL first-team All Star defenseman who in 2011 became only the third son of a Hockey Hall of Famer to also be inducted. He helped the Philadelphia Flyers to two Stanley Cup finals and had a 22-year professional career that ended with the team of his father, the Detroit Red Wings. He is currently the director of pro scouting for the Red Wings. He lives in Jackson, New Jersey. Jay Greenberg is a 40-year veteran of newspapers, magazines and websites, including the New York Post, Toronto Sun, Sports Illustrated, Philadelphia Daily News, Philadelphia Evening and Sunday Bulletin, and Kansas City Star. He authored the most complete history of a team ever published, Full Spectrum, about the Philadelphia Flyers, and has been a contributor to The Hockey News for four decades. He lives in Manalapan, New Jersey. Wayne Gretzky broke Gordie Howe's records to become the all-time leading goal and point producer in NHL history. "The Great One" lives in Westlake Village, California.