If These Walls Could Talk: Boston Bruins: Stories from the Boston Bruins Ice, Locker Room, and Press Box (Paperback) 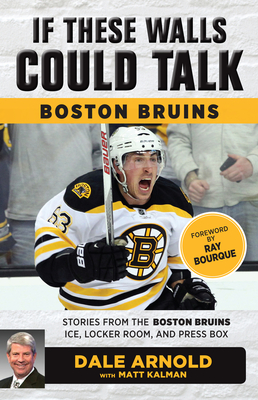 The Boston Bruins are one of the most successful and historic teams in the NHL, with six Stanley Cup championships and counting. Author Dale Arnold, as a longtime broadcaster for the team, has gotten to witness more than his fair share of that history up close and personal. Through singular anecdotes only Arnold can tell as well as conversations with current and past players, this book provides fans with a one-of-a-kind, insider's look into the great moments, the lowlights, and everything in between. Bruins fans will not want to miss this book.

Dale Arnold hosts Boston Bruins television broadcasts on NESN as well as the daily Dale, Holley & Keefe show on WEEI radio. He is the only person who has done play-by-play broadcasts for all five of the Boston area's major professional sports franchises. Matt Kalman is a freelance journalist who covers the Boston Bruins for CBS Boston, NHL.com, Yahoo! Sports, and other outlets. He is the author of 100 Things Bruins Fans Should Know & Do Before They Die. Ray Bourque played 21 seasons with the Boston Bruins and remains the team’s longest-serving captain. He holds the records for the most career goals, assists, and points by a defenseman in the NHL.