Everything All at Once: How to Think Like a Science Guy, Solve Any Problem, and Make a Better World (Paperback) 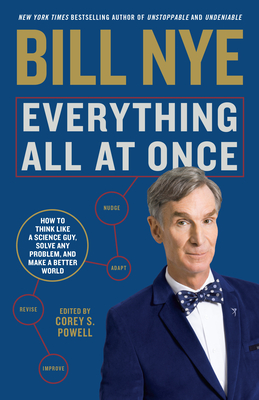 In the New York Times bestseller Everything All at Once, Bill Nye shows you how thinking like a nerd is the key to changing yourself and the world around you.

Everyone has an inner nerd just waiting to be awakened by the right passion. In Everything All at Once, Bill Nye will help you find yours. With his call to arms, he wants you to examine every detail of the most difficult problems that look unsolvable—that is, until you find the solution. Bill shows you how to develop critical thinking skills and create change, using his “everything all at once” approach that leaves no stone unturned.

Whether addressing climate change, the future of our society as a whole, or personal success, or stripping away the mystery of fire walking, there are certain strategies that get results: looking at the world with relentless curiosity, being driven by a desire for a better future, and being willing to take the actions needed to make change happen. He shares how he came to create this approach—starting with his Boy Scout training (it turns out that a practical understanding of science and engineering is immensely helpful in a capsizing canoe) and moving through the lessons he learned as a full-time engineer at Boeing, a stand-up comedian, CEO of The Planetary Society, and, of course, as Bill Nye The Science Guy.

This is the story of how Bill Nye became Bill Nye and how he became a champion of change and an advocate of science. It’s how he became The Science Guy. Bill teaches us that we have the power to make real change. Join him in... dare we say it... changing the world.

Bill Nye has been the public face of science and discovery for more than twenty years. Best known as the host of Emmy Award-winning PBS/Discovery Channel show Bill Nye the Science Guy, and current host of Netflix show Bill Nye Saves the World, Nye is a science educator, mechanical engineer, and New York Times bestselling author of Undeniable: Evolution and the Science of Creation and Unstoppable: Harnessing Science to Change the World. He is the CEO of The Planetary Society, holds a BS in mechanical engineering from Cornell University, and has seven honorary doctorate degrees.

Corey S. Powell is the science editor of Aeon and former editor-in-chief of American Scientist and Discover. He is a visiting scholar at NYU's SHERP program and a writer for Popular Science and Scientific American.

“Bill Nye, The Science Guy, single-handedly imbued an entire generation with a love of science. Herein he offers a novel recipe for how to harness that energy to save the world. I’m in. Are you?”
—Neil deGrasse Tyson, astrophysicist, American Museum of Natural History

“Bill Nye is the Science Guy, but he's more than that. He's the Mind Guy—he shows how our brains process information before they produce ideas. You know those board games that said they're for kids of all ages? This book is one of those.”
—Questlove

“This is Bill Nye at his best—engaging us with his personal journey to discover science and interwoven with anecdotes of how science has shaped human history and society today. He brilliantly differentiates between those who dabble in information and scientists who think critically in their search for cause and effect. He concludes we can tap the collective brainpower of the world to solve the largest problems facing humankind. This is book is must-read for all.”
—Mark Z. Jacobson, Professor of Civil and Environmental Engineering and director of Stanford’s Atmosphere/Energy Program

“Not since Carl Sagan’s The Demon-Haunted World has someone so elegantly shown how science is much more than figures and equations—it’s a way of looking at the world. Like Sagan before him, Bill Nye is a master storyteller, and in Everything All At Once he manages to weave science, history, politics, and delightful personal stories into a compelling treatise on the world and our place in it. Read this book and help change the world!”
—Michael E. Mann, Distinguished Professor of Meteorology and director of Pennsylvania State University’s Earth System Science Center

“In his delightful new book, Everything All At Once, Bill Nye reminds us why he remains the high priest of nerd cool, spreading his irrepressible zeal for science and wonder across every page. Tracing his story from early years idolizing Carl Sagan and Steve Martin to the success of his “Science Guy” TV show and from recent stewardship of the Planetary Society to advocacy for climate change activism, Bill writes with clarity and vision, offering a compelling call-to-arms for scientifically-literate citizens to change the world. As Bill puts it: “Information is the currency of the nerd perspective” and this book contains an embarrassment of riches.”
–Heather Berlin, Ph.D., M.P.H., Assistant Professor of Psychiatry, Icahn School of Medicine Mount Sinai, and PBS and Discovery Channel host

“Our best teachers—in school, and later, in life—understand that learning is accomplished not by dragging students kicking and screaming to truth while we try desperately to stay afloat amid a sea of facts and figures.

Nobody "gets" this like Bill Nye, America's national science-teacher-in-chief. In Everything All At Once, he smooths out the path to knowledge for us adults—all of us out here with families and jobs and attention span issues—like he did for us as children. He does it with plain truths, jolly good humor, and a respect for both his subject and his audience.

If you don't like Bill, Bill, Bill, there's something wrong with you. And if you don’t like this book, you're not trying."
—Michael Naidus, showrunner and executive producer, “Bill Nye Saves the World”