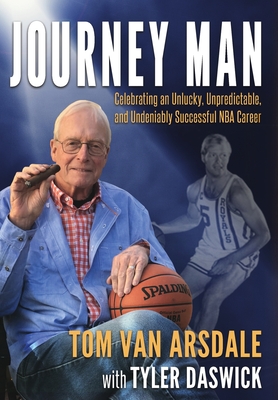 Tom Van Arsdale was born in the great state of Indiana, the heartbeat of the game of basketball. He and his twin brother became Co-Mr. Basketball in the state, at Indianapolis Manual High School. Tom was an All American at Indiana University, and spent 12 years in the NBA, becoming a three time NBA All Star. At the age of 77, Tom wrote this book detailing his reflections of his time in the NBA.

Tom Van Arsdale holds two NBA Records: He's played the most games without a playoff appearance, and scored more points than anyone without a playoff appearance. It was rotten luck to break those records, but Tom's career is more than those unwitting accomplishments. In this memoir - spanning his amateur years in Indiana and 12 seasons in the NBA - Tom shares stories, dreams, and tall tales that reveal the true nature of his time in basketball. He discussed women with Wilt Chamberlain, caught assists from Oscar Robertson, and received a life-changing second chance from Dave DeBusschere. It wasn't always steady, glamorous, or easy. This isn't about a Hall of Famer or a superstar. This is a memoir by a journeyman. Prepare for a bumpy ride.