Empire of the Normans: Conquerors of Europe (Hardcover) 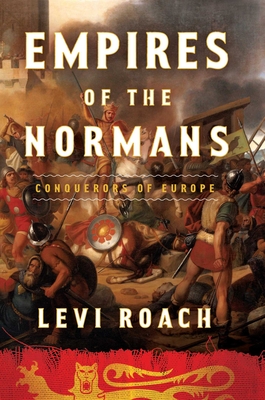 Empire of the Normans: Conquerors of Europe (Hardcover)


Coming Soon - Available for Pre-Order Now
A brilliant global history of the Normans, who—beyond the conquest of England—spread their empire to eventually dominate Europe, the Mediterranean, and the Middle East.

As Harold II, the last crowned Anglo-Saxon king of England, lay dying in Sussex, the Duke of Normandy was celebrating an unlikely victory. William "The Bastard" had emerged from interloper to successor of the Norman throne. He had survived the carnage of the Battle of Hastings and, two months later on Christmas day, he would be crowned king of England. No longer would Anglo-Saxons or Vikings rule England; this was now the age of the Normans.

A momentous event in European history, the defeat of the Anglo-Saxons had the most dramatic effect of any defeat in the high Middle Ages. In a few short months, the leader of northern France became the dominant ruler of Britain. Over the coming decades, the Anglo-Saxon kingdom would be rebuilt around a new landowning class. During the next century, as the Norman kings laid the foundations of modern Britain, their power would spread irresistibly across Europe. From Scandinavia down to Sicily, Malta, and Seville, the Normans built magnificent castles and churches. They cerated a new Europe in the image of their own nobility, recording their power with unprecedented vision, including the Domesday Book.

Empire of the Normans tells the extraordinary story of how the descendants of Viking marauders in northern France came to dominate European, Mediterranean, and Middle Eastern politics. It is a tale of ambitious adventures and fierce pirates, of fortunes made and fortunes lost. Across the generations, the Normans made their influence felt across Western Europe and the Mediterranean, from the British Isles to North Africa and even to the Holy Land, with a combination of military might, political savvy, deeply held religious beliefs, and a profound sense of their own destiny.
Levi Roach studied at Trinity College, Cambridge, and at Ruprecht-Karls-Universität Heidelberg. A former fellow at St John's College, Cambridge, he is now a senior lecturer at the University of Exeter. His first book Æthelred the Unready (Yale University Press) was awarded the Longman-History Today prize. He lives in Exeter, England.
Praise for Æthelred the Unready:

Winner of the Longman-History Today Prize

"Levi Roach offers new insights into one of the darker yet most fascinating epochs in English history. His is a masterly account: a scholarly adventure story here for the first time set out in true context and vibrant detail."

"This was an extraordinary period of English history, and there is a widening gap between academic writing about it and the general reader. A compelling and impressive picture of what was going on at the court of Aethelred."
— David Crane

“Roach successfully steers us to a real appreciation of how faith, martial prowess, an impulsive personality and the huge challenges of the Viking invasions interacted to place almost impossible constraints on Aethelred. A welcome addition to the corpus of works on an unjustifiably neglected era of English history."