The Paper Daughters of Chinatown: Adapted for Young Readers from the Best-Selling Novel (Hardcover) 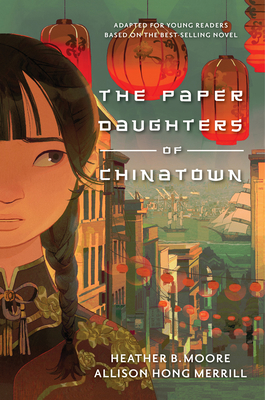 The Paper Daughters of Chinatown: Adapted for Young Readers from the Best-Selling Novel (Hardcover)


Coming Soon - Available for Pre-Order Now
Based on the true story of two friends who unite to help rescue immigrant women in the most dangerous corners of San Francisco's Chinatown in the late 1890s. When Tai Choi leaves her home in the Zhejiang province of China, she believes she'll be visiting her grandmother. But in truth, despite her mother's opposition, her father has sold her to pay his gambling debts. Alone and afraid, Tai Choi is put on a ship headed for San Francisco, known among the Chinese as Gold Mountain. When she arrives, she is forced to go by the new name listed on her paper documents: Tien Fu Wu. Her new life as a servant at a gambling den is hard. She is told to stay hidden, to stay silent, and to perform an endless list of chores, or else she will be punished. Tien Fu thinks her life couldn't get any worse, until she is sold again to an abusive shopkeeper and tasked to care for a young boy. If she is to survive, Tien Fu must persevere, and learn who to trust. When Dolly Cameron arrives in San Francisco to teach sewing at a mission home for orphaned Asian girls, she meets Tien Fu, who is willful, defiant, and unwilling to trust anyone. Dolly quickly learns that all the girls at the home were freed from lives of servitude and maltreatment. Dolly immediately joins the group of women dedicated to saving more of these "paper daughters" because some in authority have turned a blind eye to the situation. Despite many challenges, Dolly and Tien Fu forge a powerful friendship as they mentor and help those in the mission home and work to win the freedom of thousands of immigrant women and girls.

Heather B. Moore is a USA Today bestseller and award-winning author of more than seventy publications. She's lived on both the east and west coasts of the United States, including Hawaii, and attended school abroad, including the Cairo American College in Egypt, and the Anglican School of Jerusalem in Israel. She loves to learn about anything in history and, as an author, is passionate about historical research. Allison Hong Merrill was born and raised in Taiwan and came to the US at twenty-two as a university student. She holds an MFA in writing from Vermont College of Fine Arts and writes both fiction and creative nonfiction in both Chinese and English. Her work has won both national and international literary awards.