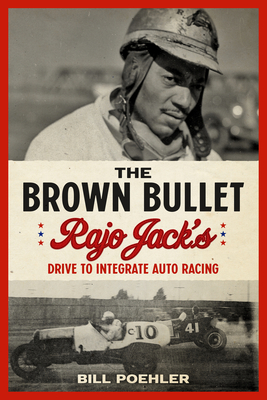 The powers-that-be in 1920s auto racing, namely the American Automobile Association’s Contest Board, barred everyone who wasn’t a white male from the sport. But Dewey Gatson, a black man who went by the name Rajo Jack, drove into the center of “outlaw” auto racing in California, refusing to let the pervasive racism of his day stop him from competing against entire fields of white drivers. In The Brown Bullet, journalist Bill Poehler uncovers the life of a long-forgotten trailblazer and the great lengths he took to even get on the track, showing ultimately how Rajo Jack proved to a generation that a black man could compete with some of the greatest white drivers of his era, winning some of the biggest races of the day.

Bill Poehler is an award-winning investigative journalist based in the Pacific Northwest, where he has worked as a reporter for the Statesman Journal for 21 years. His work has appeared in the Oregonian, the Eugene Register-Guard, and the Corvallis Gazette-Times; online at OPB.org and KGW.com; and in magazines including Slant Six News, Racing Wheels, National Speed Sport News, and Dirt Track Digest.

“Poehler has done a fine job of researching the life of Rajo Jack, relating his determination and poise in the face of discrimination.”─ Library Journal