Over in the Woodland: A Mythological Counting Journey (Hardcover) 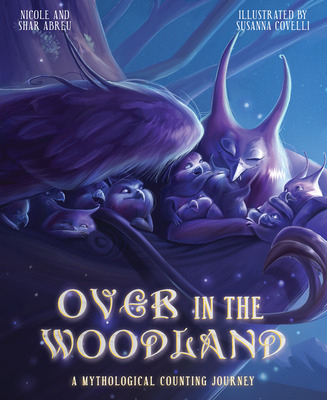 Over in the Woodland: A Mythological Counting Journey (Hardcover)

Over in the Woodland, where the mythic creatures roam,

Lived a noble griffin pride that protects the Woodland home.

“Guard,” said the mother. “We will guard every home.”

So her young griffins flew where the mythic creatures roam.

With gorgeously detailed illustrations and rhythmic text, Over in the Woodland is a magical counting adventure sure to capture the imagination of readers young and old. Based on the classic children's rhyme "Over in the Meadow," this beautiful and  whimsical version replaces frogs and birds with mermaids, dwarves, centaurs, and other creatures of the Woodland realm. Count from one phoenix to ten griffins, and find the adorable baby griffin hiding on each delightful page! A fantastic and clever addition to any children's book collection.

Nicole and Shar Abreu grew up in California, where their love of the ocean, sunshine, good books, and creativity began. They are passionate about creativity in childhood education. Nicole studied early childhood development in college and has taught preschool for children of all abilities for over a decade. Shar studied English with an emphasis in creative writing and spent more than twelve years helping create award-winning language & literacy software for young learners. They live near the mountains of Utah with their families, where dragons, mermaids, centaurs, and stories are part of their everyday lives.
In writing Over in the Woodland, the twin sisters combined one of their favorite childhood rhymes with their favorite mythological creatures. This is the first book they’ve written together, and that makes it pretty magical. You can visit them at nicoleandshar.com or on Instagram: @nicoleabreudrysdale and @sharabreupetersen.

Susanna Covelli was born in a small town in Piedmont, Italy, earned an MA in architecture, and followed her passion for art and decided to attend a specialization course in both traditional and digital illustration at Scuola Iternazionale di Comics in Turin. Her art expresses her own imagination and inspiration from nature, and she has always been attracted by sinuous shapes, Baroque style, and out-of-the-ordinary perspective