Stealing Somerville: The Death of an Urban City (Paperback) 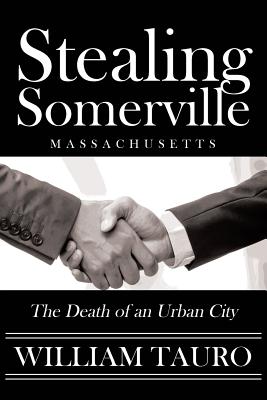 Mayor Joe Curtatone Stealing from Somerville: Death of an Urban City is an expose of abuses, a compilation of articles from Somerville News Weekly, a local newspaper. William Tauro is investigative journalist and publisher of newspaper. Tauro shows pervasive effects of Mayor Joseph Curtatone's six terms in office. Sources claim exit ramps leading to small businesses were closed to drive them out, as well as houses and properties being taken by eminent domain. The mayor and development partners do not give market value for properties. Land is appropriated by city and housing is built under the aegis of local government. People who want to build use companies approved by the mayor. Bids of contractors and vendors are tampered with so negotiations favor municipal administrators. The mayor charges firefighter candidates $10,000 to secure employment. One case resulted in death. The candidate, a navy SEAL, and scoring high on the entrance exam, was turned down. His father refused to pay the fee. The candidate took his life. Cover-ups are made by the police for the mayor. A policeman, the mayor's cousin, attempted to rob a deceased victim's valuables. A gay policeman was denied rights to address negative treatment. His pension is questioned. The mayor's drug usage fuels problems. No rebuttals or charges have been filed against Tauro. An investigation by the federal government is under consideration. The mayor was reelected for a seventh two-year term. The Board of Aldermen was replaced by new blood due to Tauro's publications during election. Hopefully, this change will reach the mayor's office.