The Falcon of Sparta (Hardcover) 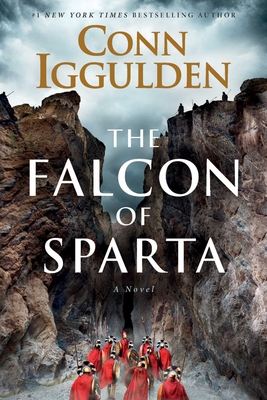 The Falcon of Sparta (Hardcover)


Usually ships to store in 2-3 Days
Based on one of history’s most epic stories of adventure, The Falcon of Sparta masterfully depicts the ferocity, heroism, and savage bloodshed of the ancient world.

Conn Iggulden, the New York Times bestselling author of the Emperor, Conqueror, and Wars of the Roses series, returns to the ancient world with a ferociously violent epic.

401 BC. In the ancient world, one army was feared above all others. The Persian king Artaxerxes rules an empire stretching from the Aegean to northern India. As many as fifty million people are his subjects. His rule is absolute. Though the sons of Sparta are eager to play the game of thrones . . .

Yet battles can be won—or lost—with a single blow. Princes fall. And when the dust of civil war settles, the Spartans are left stranded in the heart of an enemy’s empire, without support, without food, and without water.

Far from home, surrounded by foes, it falls to the young soldier Xenophon to lead the survivors against Artaxerxes’s legendary Persian warriors.
Conn Iggulden is one of the most acclaimed authors of historical fiction writing today. Among many other bestselling novels, he is the author of The Abbot’s Tale, The Falcon of Sparta, The Gates of Athens, Protector, and The Lion, all available from Pegasus Books. Conn lives in London.
"A well-researched tale of heroism and hardship, honor and betrayal in which anyone's life can disappear with a filth-tipped arrow or the slash of a kopis. Exciting fare, a yarn well-spun."
— Kirkus Reviews

"A rousing retelling of a singular event, as seen through the eyes of three leaders on a momentous trek, this latest historical novel by Iggulden will be of interest to both young and old readers of military and ancient history."
— Library Journal

"A rousing retelling of a singular event, as seen through the eyes of three leaders on a momentous trek, this latest historical novel by Iggulden will be of interest to both young and old readers of military and ancient history."
— Historical Novels Review

"Having already taken on Julius Caesar, Genghis Khan, and the War of the Roses, Iggulden successfully dramatizes the life of Dunstan, Abbot of Glastonbury and confidant of King Aethelstan, the grandson of Alfred the Great. Immerses the reader in tenth-century England."
— Publishers Weekly [praise for 'The Abbot's Tale']

"Superbly plotted and paced. An absolutely cracking story. The pace is nail-biting and the set dressing magnificent. Iggulden has created an intriguingly complex saint—flawed, spiteful, and unreliable as the teller of his own tale. Through his eyes we watch the story of the making of England."
— The Times (London) [praise for 'The Abbot's Tale']