Saturdays at Sea (Tuesdays at the Castle) (Paperback) 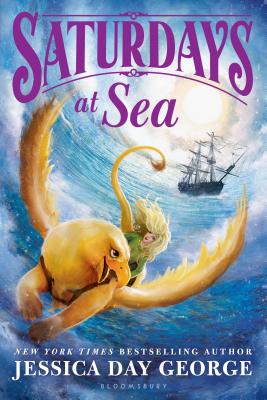 Saturdays at Sea (Tuesdays at the Castle) (Paperback)

The fifth and final book in Jessica Day George's magical bestselling series, where Celie and her family set sea on a grand ship made in the likeness of their beloved Castle!

There is never a dull moment for Celie and her family in Castle Glower--even when they're not in the Castle itself! After traveling to the seaside kingdom of Lilah’s betrothed prince, Lulath, Celie and her companions are busy training griffins, enjoying wedding festivities, and finishing construction of a grand ship built from parts of the Castle.

But on their maiden voyage, the Ship steers them far off course into uncharted waters. Celie and Lilah hope that the Ship is taking them to the ancient island where unicorns once roamed, but as the journey grows longer and supplies run low, they are in trouble. Celie, Lilah, and Rolf know they must trust the Ship as they trust the Castle, but what if they never reach land again?

Jessica Day George is the author of many books for young readers, including the wonderfully whimsical Tuesdays at the Castle and three books in the Dragonskin Slippers series. Before becoming a full-time writer, she worked as a librarian and bookseller. Jessica lives with her family in Salt Lake City, Utah.
To find out more, visit www.jessicadaygeorge.com.

Jessica Day George studied at Brigham Young University where she enjoyed classes in pottery-making and Old Norse, and dutifully forced herself to sit through biology and math.  Originally from Idaho, she now resides in Salt Lake City, Utah, with her husband, their young son, and a five pound Maltese named Pippin.

"Lovely and engaging, this fantasy series continues to have wide appeal." - Booklist on THURSDAYS WITH THE CROWN


"Fans of the series will eagerly devour this latest installment." - SLJ on THURSDAYS WITH THE CROWN


"A sweet, funny, sincere story in which siblings work together." - Kirkus Reviews on WEDNESDAYS IN THE TOWER


"Castle Glower is the true star of this charming story of court intrigue and magic. A satisfying mix of Hogwarts and Howl’s Moving Castle." - SLJ on TUESDAYS AT THE CASTLE


"This enjoyable romp turns mischief into political action and a stone palace into a cunning character. . . . These kids are clever, as is George's adventure. May pique castle envy." - Kirkus Reviews on TUESDAYS AT THE CASTLE